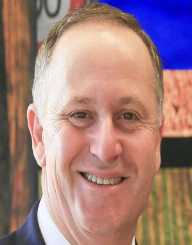 John Key was born on August 9th, 1961. His place of birth was in Auckland, New Zeeland. Key is the former prime minister of New Zealand. He was in office from 2008 to 2016. He is also famous for being the eleventh leader of the National Party. When Key assumed office in 2008, this was a tough time for New Zealand and the rest of the world. The world was going through an economic recession, and it is through his leadership skills that Key managed to stabilize his nation’s economy. Shortly after this, a massive earthquake hit Christchurch, again bringing down the economy to its knees.

Key proved himself as a great leader by helping New Zealand survive the harsh economic times after the earthquake. The two instances that he saved the nation from its nightmare earned Key global recognition as a great politician.

Key went for his early education at Aorangi School before going to Burnside High School where he completed in 1979. After this, he pursued his commerce degree at the University of Canterbury. Here, he took accounting as his major when he was a senior. He graduated in 1981 and studied management at the Harvard University John Key met his future wife, Bronagh Key while in high school- Burnside High School. The pair tied the knot in 1984. Bronagh is also well educated with a bachelor of commerce degree. John and Bronagh have two siblings Max and Stephie who is the oldest.

John Key landed his first job in 1982. He worked as an auditor at the McCulloch Menzies. With time things worked out well for him as he became a project manager at Lane Walker Rudkin, a clothing manufacturing company. Around this time, he also landed a few jobs before working at Bankers Trust in Auckland in 1988. During the late 1990s, he was the Foreign Exchange Committee member of the New York Federal Reserve Bank. It is also during this time that his interest in politics grew. As a result, he also caught the attention of the National Party leaders including John Slater.

With the rising population that was witnessed in Auckland, a new electorate was created and called Helensville. Key participated in the 2002 elections and emerged victoriously. In 2005, he also won the same elections, this time more comfortably. Before winning these elections, he had been promoted as the National Party finance spokesman by Don Brash. In 2006, Brash decided to resign from the post of the National Party leader. This led to Key taking over after being elected to office months later.

John Key rose the political ladder to become a major opposition leader. In the 2008 elections, he won the majority votes and assumed office after being sworn in later in November 2008. Unfortunately, taking over as the new prime minister of New Zealand also had its challenges. At this time, the world was facing a major economic recession. His credit as a great leader came in after formulating steps that would save the nation from the economic torture. Part of his economic solutions was to form agreements with United Future, ACT and Maori parties. In his efforts in trying to build New Zealand’s economy to stability, a massive earthquake hit Christchurch in 2011. This had a negative impact on the nation’s economy as Christchurch was one of the main cities. John Key’s efforts were again witnessed in bringing the economy to economic steadiness. This contributed to his re-election in 2011 and 2014 elections. This, therefore, gave him the opportunity of serving as the prime minister for three consecutive terms.

In 2016, John Key resigned from his post as the prime minister. His resignation from office also pulled him away from being the leader of National Party. Sources claim that his move was to give him more time to spend with his family. Bill English superseded him as the 39th prime minister of New Zealand.