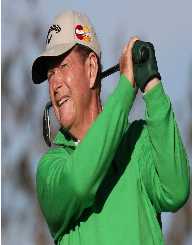 His father introduced him to golf at a young age. Watson studied at Pembroke-Country Day School, and he was on the school’s golfing team. He then went to Stanford University and was on both the golf and table tennis teams. He graduated in 1971 with a degree in psychology.

After his graduation from university in 1971, Tom Watson joined the PGA Tour. In 1973, Watson hired Bruce Edwards to be his caddie, and Edwards remained Watson’s caddie for many years afterwards.

Tom Watson's first major championship was the U.S. Open in 1974. After having the 54-hole lead, he faded badly and was very disappointed with his efforts. Just two weeks later, Watson won his first Tour title.

After his loss in the U.S. Open, Watson had been approached by Byron Nelson. Nelson was a retired player of legendary status, and he was broadcasting the event. He offered to help Watson because he was so impressed with him.

Under the tutoring of Nelson, Tom Watson's game improved dramatically very quickly. He won the 1975 Open Championship in Britain, his first major championship. His second major championship was also his first green jacket at the Masters in 1977. In 1978, Watson had five PGA Tour wins, and five again in 1979.

Over the next few years, Tom Watson's form declined, and despite several top ten finishes, he never again hit the same form he had earlier in his career.

Tom Watson's final appearance in the Masters was 2016, where he announced he couldn’t compete anymore.

Tom Watson had 70 wins in his professional career. 39 were PGA wins, four were on the Japan Golf Tour, and 14 on the PGA Tour Championships.

Tom Watson held many records, and he received many awards and honors.

Tom Watson married Linda Rubin in 1972, but they divorced in 1997. His second marriage was to Hilary Watson in 1999. He has two children, a son, Michael, and a daughter, Meg.

His long-time caddy, Bruce Edwards, was diagnosed with Lou Gehrig’s Disease in 2003. Watson, in conjunction with Edwards, spent a considerable amount of time as well as money in 2003 to raise funds for research. Edwards died on 8th April 2004.