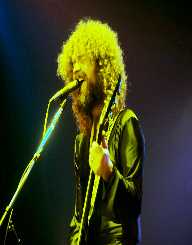 Brad Delp was an American singer and songwriter and guitarist. Born on June 12, 1951, he was the lead vocalist of the rock bands Boston and RTZ. He was known for his distinctive vocal power, and ability to sing all harmonic parts on songs. Delp committed suicide by carbon monoxide poisoning on March 9, 2007.

Brad Delp was born on June 12, 1951, in Peabody, Massachusetts to parents who wereFrench-Canadian immigrants. He grew up in Danvers, Massachusetts. He received education from Danvers High School.

Brad Delp was a multi-instrumentalist with the ability to play the guitar, keyboard, and harmonica. Aside from that, he had a powerful voice and sang all harmony parts on every song. Brad Delp was a member of the short-loved band, Mother’s Milk from 1973 to 1974 alongside Tom Scholz. He first met Scholz after an introduction by guitarist Goudreau in 1969, during which Scholz was in search of a singer to complete some demo recording.

Mother’s Milk later changed to Boston and signed by Epic Records. The band released a debut self-titled album August 1976. Delpserves as the lead and backing harmony vocalist for the album. The album was a great success and commercially successful. it has sold over 20 million copies since its release. It contained rock standards including More Than a Feeling, Foreplay/Long Time and Peace of Mind. Delp also wrote some of the songs on the album including the closing track, Let Me Take You Home Tonight and co-wrote Smokin alongside Scholz.

After the success of the album, they release Don’t Look Back in August 1978, which produced hit songs like Party, and the ballad  A Man I’ll Never Be. Delp featured on Barry Goudreau's self-titled solo album as a vocalist in 1980. The band’s third album Third Stage was released in 1986, with Delp writing co-writing songs like Cool the Engines and Can’tcha Say (You Believe in Me)/ Still in Love. They also released Greatest Hits, 1997 and Corporate America in 2002 with Life, Love,& Hope released in 2013, after the death of Delp.

Brad Delp formed the band RTZwith Barry Goudreau in 1991, with a debut album Return to Zero the same year. They released other works like Lost, 1998 and Lost and found in 2005.

Brad Delp also did projects with other artists, especially when he had some time off his Boston. He worked with a Beatles tribute band called Beatlejuice since the Beatles was one of his favorite bands. He also recorded songs with Goudreau and released the CD Delp and Goudreau in 2003 and the single "Rockin Away" 2008.

Brad Delp married twice and all ended in a divorce. He had two children, John Michael Delp and Jennifer Delp with his second wife, Micki Delp. He was a vegetarian for 30 years of his life.

Brad Delp committed suicide by inducing himself with carbon monoxide poisoning at his Atkinson, New Hampshire home supposedly between 11:00 pm on March 8 and 1:20 pm on March 9, 2007. He was 55 years old. The police went to the scene after receiving a call from his girlfriend Pamela Sullivan who discovered that a dryer vent tube was connected to the exhaust pipe Delp’s car. His lifeless body was found dead in his master bedroom on the arrival of the police. The police also found two charcoal grills lit inside his bathtub that filled the room with smoke and a suicide note clipped to the neck if his T-shirt. The note read, " Mr. Brad Delp. 'J'aiuneâme solitaire'. I am a lonely soul." He also left four sealed envelopes in his office addressed to his former wife Micki, children, his fiancée, and an unnamed couple.