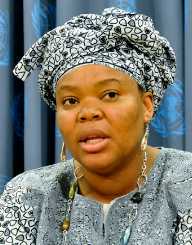 Leymah Gbowee was born on February 1, 1972. She is a Liberian peace and women’s rights activist. She has played a significant role in the peacebuilding and promotion of women’s leadership in peace in Liberia. In 2003, she led the peace movement which was known as the Women of Liberia Mass Action for Peace which brought an end to the Second Liberian Civil War. In  2011, she received the Nobel Peace Prize jointly with Tawakkul Karman and Ellen Johnson for their significant peace works.

Leymah Gbowee was born on February 1, 1972, in Central Liberia. She was brought up alongside three siblings. She had a dream of becoming a doctor when she was young. After she graduated high school, the First Liberation Civil War broke out in Liberia and so she could not join the university. In 1996, the war subsided, and she learnt of a program that was being offered by UNICEF. The program was involved with the training of people to be social workers who would help those traumatised by the war. Leymah Gbowee joined the program to provide a better life for herself and her family. At that time she was in a relationship with an abusive man. In 1998, she realized her dream of becoming a peace activist when she volunteered at the St. Peter’s Lutheran Church, Monrovia.

In Monrovia Leymah Gbowee served with Trauma Healing and Reconciliation Program. At the program, she met Samuel Doe who was the executive director of the West Africa Network for Peacebuilding (WANEP). She was motivated by Doe to read more in the field of peacebuilding. She later became involved with WANEP when she realized that the organization was seeking the involvement of women in its operations. She became friends with Thelma Ekiyor who was a Nigerian. Thelma was a lawyer, and she organized the first meeting of the Women in Peacebuilding Network (WIPNET) in Ghana.

Leymah Gbowee joined WIPNET and became the leader of the network later on. In 2002, she led the women’s peace movement, Women of Liberia Mass Action for Peace which many women joined. She then got a meeting with President Charles Taylor. At the meeting, she demanded peace and she not give up on her efforts to restore peace. In 2003, the Accra Comprehensive Peace Agreement was signed, and it brought an end to the Liberian War. Her efforts are what led to the signing of the agreement.

In 2007, Leymah Gbowee received the Blue Ribbon for Peace from the John F. Kennedy School of Government, Harvard University. In 2010, she was awarded the John Jay Medal for Justice by the John Jay College of Criminal Justice. In 2011, she received the Nobel Peace Prize jointly with Ellen Johnson and Tawakkol Karman for their significant peace works. In 2013, she received the New York Women’s Foundation Century Award.

Leymah Gbowee is a single mother of six children, one of the children being adopted. She walked out of an abusive relationship and made a brilliant life for herself. She is currently forty five years old.