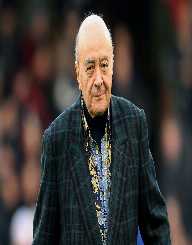 Mohamed Al-Fayed is a rich Egyptian entrepreneur and owner of Hotel Ritz Paris. This hotel is ranked among the most prestigious and luxurious hotels in the world. It is located right in the heart of Paris. He has been the owner of the hotel since 1979. Al-Fayed is known to have businesses all over the globe. He exhibited his skills in a business way in high school when he sold homemade lemonade. His brother-in-law Adnan Khashoggi, a major entrepreneur, had much influence on his business skills.

He used to own Harrods Department Store till he sold it in 2010. He founded a shipping company with the help of his brothers. The company later expanded its territories to England and Italy. With his connections with successful business magnates worldwide, he is a proud owner of many business companies internationally. In 2013 he was the 1,031st-richest person with an estimated wealth of US$1.4 billion.

Mohamed Al-Fayed was born on January 27th, 1929. His birthplace was in Alexandria, Egypt. He was the first born to a primary school teacher. He has four other siblings-Ali, Salah, Soaad, and Safia. In the early 1970s, he has been called Al-Fayed. He began business as a young boy way back in school.

In 1954 Mohamed Al-Fayed worked for his brother-in-law Adnan Khashoggi. He was the brother to his wife, Samira Khashoggi. His brother-in-law was a businessman and Saudi Arabian arms dealer. Al-Fayed formed a shipping company in Egypt. This was with the help of his brothers. He later made Italy the headquarters of the company and added other offices in London. Among his business associates were the likes of François Duvalier and de Mohrenschildt. François Duvalier was the president of Haiti, and de Mohrenschildt was a geologist.

In 1966 he was the financial adviser to Ali Saifuddien III. This was the Sultan of Brunei Omar at the time. He owed this responsibility to Sheikh Rashid al Makhtoum the Ruler of Dubai. He believed in Al-Fayed’s abilities in transforming Dubai. Al-Fayed then contributed to the development of construction work in Dubai.

He achieved this by delegating this duty to British companies. In 1974 he relocated to Britain. He acquired businesses from the 70s. In 1979 he became the proud owner of Ritz Hotel in Paris. He had to part with the US $30 million to acquire the hotel. He restored the hotel to be the prestigious hotel it is now.

In 1984 Al-Fayed together with his brothers owned 30% shares at House of Fraser. A year later the brothers attained full ownership. In 1986 he was given Parisian villa which belonged to Duke and Duchess of Windsor. He was to lease it for 50 years as per the contract he signed. He restored it and later opened it in 1989. He then received Plaque de Paris following the opening of the Villa. This was one of the greatest honors in the City. In 1997 Al-Fayed purchased the freehold belonging to Fulham F.C. he sold it years later.

Al-Fayed was the founder of Al-Fayed Charitable Foundation in 1987. This was a charitable center for underprivileged children. He is then known for this as a philanthropist. In 2002 he was awarded Freedom of the Highlands. He received the award from The Highlands of Scotland tourist board

Mohamed Al-Fayed wedded Samira Khashoggi in 1954. The couple had a son- Dodi Fayed. He died in 1997 from a car accident. They separated in 1956. He later married Finnish socialite and Heini Wathén.