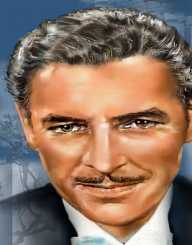 Ronald Colman is known as one of the greatest stars of American films during the Golden Age. He was born in 1891, February 9 in Richmond, Surrey, England and raised in Ealing. He starred in many films during the 1930s and 1940s and had earned an Academy Award for Best Actor. Colman died of emphysema in Santa Barbara, California at the age of 67 on May 19, 1958. He was married to Thelma Raye (1920-1934) and Benita Hume and had one child Juliet Benita Colman.

Ronald Colman was the son of Charles Colman and Marjory Read Fraser born on February 9, 1891. Born in England, he went to a boarding school in Littlehampton from where he developed a talent in acting. He wanted to study engineering at Cambridge University, but this dream was shattered when his father died in 1907, and there was no financial support. He embraced the stage and became a good actor as a member of the West Middlesex Dramatic Society from 1908 to 1909. His first professional acting role and performance was in 1914.

Ronald Colman worked as a clerk in London at the British Steamship Company and later joined London Scottish Regionals. He was sent to France in 1914, September when the World War I had just begun to fight at the Western Front. During the battle of Messines in 1914, he succumbed to severe injuries giving him a perpetual wound and was retrenched from the British Army in 1915.


Career In The Theatre And Film

After the dismissal from the army, Ronald Colman found a breakthrough in 1916 when he acted alongside Gladys Cooper in ‘The Misleading Lady.’ In 1917, he appeared in the plays ‘Webber in Partnership,’ and in 1918 he played in ‘Damaged Goods,’ ‘The Little Brother’ and ‘The Bubble.’

When he went to the United States in 1920, Ronald Colman continued with his dramatic role. He made appearances in the plays ‘The Green Goddess’ in January 1921 and ‘The Nightcap’ in August the same year. The following year in September, he played as AlinSergyll in the play ‘La Tendresse.’

Director Henry King spotted Colman while doing stage plays and decided to introduce him to the film industry. Ronald Colman was given the leading role in the 1923 film ‘The White Sister’ in which he did an impressive work. He after that left the theatre for film and acted in romantic and adventure films. The films he first appeared were ‘The Dark Angel’ (1925), ‘Stella Dallas’ (1926), ‘The Winning of Barbara Worth’ (1926) and‘Beau Geste’ (1927).

Ronald Colman ventured into The Jack Benny Program on the radio with Benita Hume his second wife. This program gave birth to the comedy The Halls of Ivy which was aired from 1950 to 1952 on NBC radio. The program was incorporated into the television series on CBS TV and was broadcast for a season (1954-1955).

Out of three nominations for the Academy Award for Best Actor, Ronald Colman won the third nomination in ‘Bulldog Drummond’ (1929) and ‘Condemned’ (1929). He again won in ‘A Double Life’ (1947) and was awarded a Golden Globe Award for Best Actor. He has a George Eastman Award for his contribution to film and two stars on the Hollywood Walk of Fame.

Ronald Colman continued with his career as an actor for the rest of his life until he contracted illness known as emphysema. He died in 1958, May 19 at the age of 67 in Santa Barbara, California and was buried at the Santa Barbara Cemetery. He left behind his second wife Benita Hume and one daughter Juliet Benita Colman.