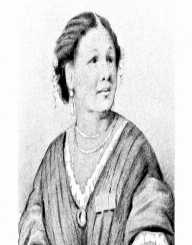 Mary Jane Grant best known as Mary Seacole was a Jamaican businesswoman known for her involvement in the Crimean War through providing health care and other services to wounded servicemen. After several refusals by the War Office to travel to Crimea, she mobilised money and travel on her expenses to set up what was known as the British Hotel behind the lines.

Born on November 23, 1805, Mary Seacole became very popular among the servicemen she helped and years after the war; they also replicated the gesture by raising money for her when she got impoverished after the war. Today Seacole is celebrated for her service to humanity and has posthumously voted the greatest black Briton in 2004 and has been awarded the Jamaican Order of Merit in 1991.

Mary Seacole was born on November 23, 1805, in Kingston, Jamaica to James Grant and a free Jamaican woman. Her father was a Scottish Lieutenant in the British Army, and her mother was a traditional healer who used the Caribbean and African herbal remedies to treat her patients. She also operated one of the best hotels in Kingston called Blundell Hall. She was always proud of her being a Jamaican-Scottish calling herself a Creole “a term used for children of white settlers with indigenous women”.

Growing up Mary Seacole understudied her mother and picked up the profession. According to her autobiography, she started experimenting on dolls, then pets and later to human as she helped her mother treat patients. She spent part of her early years with a woman she refers to as Kind Patroness who gave her excellent education before later returning to her mother. She would then in 1821 spend a year in London after visiting some relatives there. She also travelled to other places and returned to Jamaica in 1825.

Mary Seacole got married to Edwin Hamilton Seacole in 1836 and moved to Black River to operate a provision store. The shop was however not successful, which necessitated their return to Bundle Hall in1841. Disaster, however, loomed the family, especially Seacole as Bundle Hall caught fire and burned down in 1943, and a year after her husband Edwin also died later her mother. Bundle Hall, was however rebuilt and Seacole took over the management as well as serving as a healer.

During the outbreak of cholera in 1850 which killed over 32,000 Jamaicans, Mary Seacole helped in treating most of the patients. She would also help treat cholera victims in Panama as she visited her half-brother Edward, who had also opened a new hotel there.

The Crimean War was between the Russian Empire and an alliance including the United Kingdom, Ottoman Empire, France and the Kingdom of Sardinia from October 1953 to April 1, 1956. During the almost three-year war, there was an outbreak of diseases especially cholera. This necessitated the recruitment of nurses to help save lives. The Secretary of State for War later approached Florence Nightingale to sphere head the recruitment. Seacole, who was then on a business trip in England tried to enrol on the list of nurses through the War office and other government office but proved futile.

With her persistence to help, Mary Seacole later applied through the Crimea Fund which was set to help the wounded in the war, but that also failed. She then gathered her resources and set off for Crimea to open the British Hotel. The hotel was set at a place she called Spring Hill from abandoned wood, metals, packaging cases, iron sheets and window frame with the help of local labour. The hotel was finally opened in March 1855.

As per the advice of one of the pioneer visitors of the hotel, Alexis Soyer, a French chef, Mary Seacole focused on providing food and selling provisions. Her business there prospered but not until the war ended. At this time business went down, sales were low due to the evacuations of the soldiers. She had already ordered new goods which arrived by day. With this new development, most of her assets were auctioned at lower prices by her creditors. Seacole left for Crimea, rich but returned poor in August 1956.

Mary Seacole returned to England with lousy health and debt. Her creditors pursued her each day making life unbearable for her. The pursuit of creditors made her move to 1, Tavistock Street, Covent Garden where she was later declared bankrupt by the Court of Basinghall Street on November 7, 1956. Many people came to aid through a fund which was set to relief her from plight. She was later on January 30, 1857, granted a certificate to discharge her from bankruptcy.

In July 1957 her biography Wonderful Adventures of Mrs Seacole in Many Lands, was released by James Blackwood. It was the first autobiography of a black woman in Britain. She later in 1860 returned to Jamaica where she became a prominent figure. Her funds also gained a substantial amount and were able to buy land on Duke Street in Kingston to build a bungalow. She later spent some years in London until her death.

Even though Mary Seacole was prominent during the latter days of her life, her fame died with her. She has however in recent time been given prominence and well acknowledged. Her life has since become a case study on social injustices and racial attitude in the nineteenth century. She has posthumously been honoured and given several awards, including the Jamaican Order of Merit, 1991, and in 1954 "Mary Seacole House" the headquarters of the Jamaican General Trained Nurses Association was in her honour.