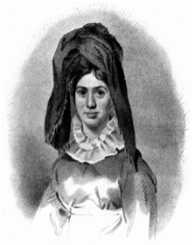 Mary Baker was a charming young woman who disguised herself an Oceanic Princess to con the people of Gloucestershire.

Mary Baker was born in 1792 in Devon, Britain. She was the daughter of a local cobbler who’s six other children died in their infancy. At birth, she was given the name Mary Willcocks. Her parents were poor and Mary did not like such a life. She worked for several families as a housekeeper. Due to her eccentric behavior, Mary was dismissed by her employers. She went back to her parents but did not stay for long. She had tasted the exotic life of the outside world. The allure to go back to the outside world made her leave home again.

After wandering in many homes, she got a job in a Jewish family household. Mary was fascinated by their weird way of life. They had a strange diet, prayed in an abnormal manner and had a foreign language. She started learning the foreign culture from her employers. The family liked her storytelling prowess. Mary quickly became part of the household. One day she left after an argument. She never returned to her employer.

Mary went to Almondsbury in the town of Gloucestershire. She was dressed in foreign attire. Mary had a black turban on her head, black overflowing gown and shoulder shawl. She passed through the streets with the locals in the watch. Mary finally went to a local cobbler who took pity on her. Speaking in strange words, she gestured for food and a place to sleep. The host gave her food to eat. The host family was wary of her and took the stranger to the town clerk Samuel Worrall.

Fascinated by her strange behavior and language, Worrall gave her shelter. His efforts to discover more about her yielded nothing. Worrall and his wife decided to take her to the magistrate for being a vagrant. She was tried and placed at a Bristol hospital which was the caring shelter for the homeless. Mary continued with her exotic tantrums and was taken back to the Worrall family. Soon the news of the strange woman called Caraboo spread throughout the town. Mary became a tourist attraction. She had a peculiar diet and strange habits. Mary took black tea and was a strict vegetarian, she only prayed on the roof of the house to her deity Alla Taalla. She wore black flowing robes and was much interested in the oriental artifacts in the household.

About two weeks after her return, Mary met a Portuguese speaking sailor. Manuel Eynesso claimed to understand her language. After her narration, Eynesso gave the interpretation. The stranger was a local princess from an Indian Ocean island kingdom called Javasu. He further explained that she was captured by pirates and brought to England. She escaped by jumping into the English Channel and swimming ashore. Mary became a celebrated royalty. She had her status elevated within the community. Mary now Princess Caraboo, enjoyed her exotic life.

Samuel Worrall took a sample of the strange Javasu alphabets to Oxford University. The linguistics experts dismissed it as a hoax. At the same time, a woman claimed that she knew Princess Caraboo. She identified her as Mary Willcocks, her former housekeeper. The royalty status came to an end. Mary pleaded with the Worrall family to help her move to Philadelphia, in the American colonies. Mary was transported to America. In the American city, Mary became Princess Caraboo. She tried to earn a living in acting. When things did not work out she returned back to England.

In 1828, she married Richard Baker under another disguised name Mary Burgess. Mary had her first child in 1829. She named the daughter Mary Ann. She established the business of selling leeches to a local Bristol hospital. During this time, the leeches were a lucrative business venture. Mary Ann continued with the business after her mother died. Like her mother, she lived a weird life. She did not get married and lived in the family house full of her pet cats. She passed on in an inferno in February 1900.

Mary Baker died on December 24, 1864, in Bristol city. Her remains were buried at the Hebron Road Cemetery. Her life as Princess Caraboo has been immortalized in the film Princess Caraboo. The film was released in 1994. Several novels like A-Z of Curious Bristol, and the Crooks who Conned Millions are just an example. Some stage plays about the strange Javasu Princess Caraboo have been acted out.