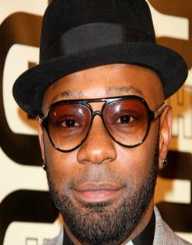 Nelsan Ellis was one of Hollywood’s raising promising talents with a mark in the film industry. He made his mark playing the role of the character Lafayette in one of HBO vampire series, True Blood. The fantastic actor Nelsan Ellis was born in the year 1978 in Harvey, Illinois. He got his acting training in one of America’s prestigious acting school the Julliard School in New York City. Before he could make it as one of HBO's famous actors, Ellis spent most of his time on stage.

On landing the role of the character Lafayette in the series true blood, he sprung to fame overnight. During his short life and career, he managed to appear in other major films.  Some of these include Get on Up, The Butler, Experiment and The Stanford Prison. The year 2016 saw him make another come back on the series of Sherlock Holmes. Ellis had complications with his heart. Therefore, he passed on due to his complications on the 8th of July 2017. He was only 39 years of age.

The young Nelsan Ellis was born in Harvey, Illinois to his married parents. However, he later got the opportunity to move to Bessemer, Alabama at the age of 6 years.  This was when his parents had gone through a divorce. He had a rough childhood due to poverty therefore at a time in life they became a ward of the state. They never had a permanent home during his childhood and consequently were always on the move. Also, most of the time they would stay at the homes of other relatives.

Moreover, they were also in one of the most racist states in the south. At one point during an interview, Ellis described his childhood as hell. In short, Ellis did like growing up in the Southern part of the country. Despite the hurdles that he had to overcome, Ellis still had his grandmother and aunts. They took care of him and other many siblings. Ellis ones said that his aunts and grandmother were strong ladies. Moreover, he had to work hard if he was to make it in life.

Sometime later at the age of 14 years, Ellis got the opportunity to join high school. However, he had to move back to Illinois with is an aunt and kive next to his father. He went to Thornridge High School. At the school, Ellis got to realize that he had terrific acting and oratory skills by helping one of his friends. By doing so, he caught the attention of some of the coaches. Thereby, he later won some of the completions like the Duo Interpretation Championship. Mind you the completion was one of a national level. In high school due to the influence of his teachers, Ellis took up the role of Junie in one of the plays- The Colored Museum.

Just after graduation, Ellis took up military service. Therefore, he joined the United States Marine Corps when he was only 17 years of age. Thus, Ellis got to spend some in the military. However, his love for the theater took over drawing him back to school.

Therefore, he joined one of the finest acting institutions in America, Julliard School. However, upon joining Julliard School, Ellis underwent one of the most horrific episodes in life. His brother-in-law shot and killed his pregnant sister. It was a weakening moment in life, but he worked through it. He buried himself in acting making it into an art form. Thereby, making it to his first stage play,-Ugly. This was a narration of ultimate love and how it hides several numbers of sins.

The play Ugly was a work of art explaining the horrid things that happen due to domestic violence. Consequently, due to his performance on the piece, Ellis won the Lincoln Martin E. Segal Award. So, over the next several years, Ellis would work on his art with a driven passion until he got his first break in the year 2005.

After several years of acting on stages, Ellis finally got his break to appear on the big screens. By performing on the HBO series True Blood, Ellis’ door to opportunities opened. However, he had gotten other roles on other major films like The Inside and Veronica Mars. He was one of the actors that brought light to the series. This was although his part in True Blood was a small one. Therefore, he was one of the most influential role players in the series. He went ahead to appear on the significant work like The Help, The Butler (2013), and Reluctant Fundamentalist (2012).

The death of Nelsan Ellis came on the July 8th, 2017. He was only 39 years at the time of his death leaving many in the grief of such hidden talent. Many friends and costar mourned the untimely passing of the young man. Most of them took to social media to pass their condolences and praising his beautiful work.

Nelsan Ellis true to the game