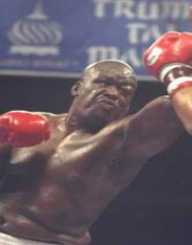 James “Buster” Douglas was born on April 7, 1960, in Columbus, Ohio. His father was the professional boxer William “Dynamite” Douglas. His childhood was spent in the Linden neighborhood of Windsor Terrace. Douglas attended the Linden McKinley High School. During his time in high school, he played football and basketball and led his team to Class AAA state basketball championship. After finishing high school, he attended Coffeyville Community College and played basketball for the Red Ravens. Throughout 1979, he played basketball at the Sinclair Community College and earned a basketball scholarship to Mercyhurst University.

After his time in the university, Douglas came back to Columbus to focus on boxing. He was in his twenties at the time and quickly became known as the Desert Fox in the city’s boxing community, due to a misinterpreted encyclopedia entry.

Douglas started out his boxing career on May 31, 1981, when he defeated Dan O’Malley. He won his first five fights until he met with David Bey, twenty pounds heavier than him and was knocked out. He won all of his next fights until meeting with Steffen Tangstad, where he and Tangstad had a draw. Douglas continued to fight journeyman fighters over the course of next year. His largest fight of 1983 was with Mike White, but Douglas lost.

On November 1983, Douglas was supposed to fight the contender for heavyweight champion title Trevor Berbick. Berbick pulled out of the fight just a few days before it, and Randall Tex Cobb was elected to take his place, and during the match, Douglas defeated his opponent. In 1986, Douglas defeated the former champion Greg Page and earned a shot at the International Boxing Federation championship. He fought against Tony Tucker but lost in the tenth round. In 1989, Tucker won over Trevor Berbick and future champion Oliver McCall. This earned him the shot to fight the undisputed heavyweight champion Mike Tyson.

Douglas and Tyson fought on February 11, 1990, at the Tokyo Dome in Tokyo. The public expected Douglas to be knocked out in the first round, but he became the first challenger to take Tyson beyond the fifth round since 1987 and finally won the fight.

Tyson turned up to be too slow against Douglas’s serious attitude. In the fifth round, Tyson’s eye was already swollen from the many jabs he was taking and by the end of the fight, it was already swollen completely shut. In the eighth round, Tyson knocked Douglas down. In the ninth round, Tyson aggressively tried to knock Douglas down, but his multi-punch combination held Tyson back in the ropes. In the tenth round, Douglas completely dominated over Tyson and became the new heavyweight champion of the world.

Loss Of The Title

After the fight, Tyson protested the results due to the 8th round knock out count. IBF immediately recognized Douglas as the new champion, but WBA and WBC refused to do so due to Tyson’s protest. After a couple of days, Tyson withdrew his protest and Douglas was officially the undisputed heavyweight champion.

As the new champion, Douglas was offered a rematch with Tyson for a major amount of money. However, he did not want to deal with Tyson’s camp and his promoter. Therefore he decided on a fight with the number one contender Evander Holyfield. The fight took place in October 1990. Holyfield dominated the match during the first two rounds, and in the third round, Holyfield knocked Douglas out, ending his brief status as the world champion. After this fight, Douglas retired from boxing.

The Douglas vs. Holyfield fight earned Douglas 24.6 million dollars. Over the next years, he stopped training and gained a lot of weight, reaching 400 pounds. At one time he almost died of diabetic coma and decided to return to sport. After his comeback, he won six straight fights but lost to Louis Monaco in 1997. In the late 1990s, he was scheduled to fight Roy Jones, Jr., but the fight fell through. Douglas participated in two fights that he won and retired in 1999 with a record of 38-6-1.