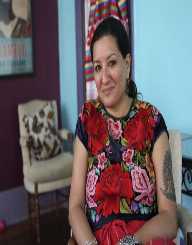 Sandra Cisneros is an American writer who is renowned for her first novel, The House on Mango Street.  She is well acknowledged as being a pioneer in her literary field. She, being the first Mexican-American writer published her works by a mainstream publisher. Surprisingly, most of her books are translated into more than 12 languages. While she graduated from school, she found herself lonely with the thought of leaving Mexico for the US. She is always ready to pen down her experiences to book. These experiences are known for making up her novels.

Sandra Cisneros is known to have had the opportunity of writing and exploring the problems facing the Mexican and the American cultures as well as the problem of a misogynist. She also touches thproblem of poverty. She uses different writing skill which includes the use of a the first person, third person and stream of consciousness narrative technics. She also could change her style to use a brief impressionistic, poetic language and longer event-driven words. She is known to be good at critiquing the social norms of the community.

Born to a Mexican Father and a Chicana Mother, Sandra Cisneros was born on the 20th day of December 1954 in Illinois, Chicago. She was born in the midst of six brothers. They had to shift base from Chicago to Mexico due to the work of his father-upholsterer. Sandra Cisneros became very shy as a result of this and could not keep up with a very lasting friendship or relationship. On the other hand, her mother, Elvira, is a very extensive reader as well as a highly influential fellow. She is well enlightened and conscious about the world than her husband. She often ensures that her daughter gets to realize and achieve her potentials in life.

Sandra Cisneros went to JosephinumAcademy where she received her high school education. There, she wrote poetry and became the editor of a literary magazine. She later went to Loyola University where she graduated with a BA in English in 1976. In two years, she had her Masters of Fine Arts from Iowa Writer’s Workshop at the University of Iowa.

Upon her graduation from the University, Sandra Cisneros ventured into teaching the former high-school dropouts at the Latino Youth High School in Chicago, in 1978. She got to known and had ample experience of the problems of the young Latino America. She then ventured to write her hit novel, The House on Mango Street in 1984. This book discusses the issues of gender inequality and marginalization of cultural minorities boldly. Through the courage in this book as well as her top-notch writing skills, she surprisingly got offers from many top universities as Writer-in-Residence. She told people that she got her inspiration from what she experienced in life and what she observed from people. One thing that is surprising about her is that she makes a record of conversations to incorporate them into stories.

Sandra Cisneros is of the Spanish origin and thus uses her languages regularly. She even co-switch very well with the English language to give it some ginger. However, she uses very easy and highly comprehensible sentence formation for non-Spanish speakers to understand. By 1991, she published her short stories, Woman Hollering Creek, and other stories.

Sandra Cisneros was able to enlighten the public on the reality of the women in her patriarchal society. She was also able to distinguish the romantic mythologies on love and sex from the reality. She later wrote Never Marry a Mexican where he critiqued the Mexican style of thinking that a woman is either a virgin or a whore. To her, this thinking has a lot of limitations on the women folk and which must not be. One thing that is very noticeable in her writing is that most of her works surround America, Mexico or fictional borders. She also talks about sexual, class and ethnicity notion between the two countries above.

Her first work is her major work. It is the work that garners over 2 million copies sale upon release in 1984. That novel is The House of Mango Street, and it was the one that earned her offers to be the writer-in-residence for some universities.

Sandra Cisneros did not believe in marriage at all and she never married. She believed that living alone will allow her to be happy and enjoy the joy in writing. She wants to write without interference and even called her writing her child. She later founded The Macondo Foundation which works with writers to write about non-violent social changes and community building. She then founded a foundation in which she awards writers that were born in Texas, writes about Texas or have lived there since 2007. To her, it is to commemorate the memory of her father; thus, she named it Alfredo del Moral Foundation.