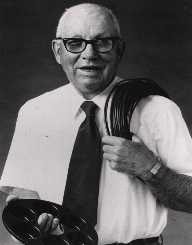 Paul Flory was born on June 19, 1910, in Illinois, USA. His parents were Martha Brumbaugh and Ezra Flory. He also had a brother (James) and two step-sisters (Margaret and Miriam).

For Flory’s high school education, he attended Elgin High School. He later graduated from this school in 1927. After graduating from high school, Paul Flory went on to attend Manchester College (now called Manchester University). He studied there until he graduated with a bachelor’s degree in chemistry in 1931.

Paul Flory then went on to attend Ohio State University for his doctorate studies. He later graduated from this school with a Ph.D. in physical chemistry in 1934.

After earning his final degree in 1934, Paul Flory went on to work at the EI du Pont de Nemours and Company in the central research department. Because of this, his main work-related task was simply to research various chemicals. It was while working here that Flory got to meet and work with many intelligent scientists, including Wallace Carothers. Together, along with other scientists, they invented both neoprene and nylon, which are now both used for many things. This would be known as one of Flory’s great career accomplishments.

In 1937, Flory’s partner, Carothers, passed away. After this, Paul Flory left the EI du Pont de Nemours and Company and started to work at the University of Cincinnati’s Basic Science Research Laboratory.

Paul Flory had more freedom in this laboratory than he had in at the last laboratory. While there, he continued to study polymers. In the few short years that he worked here he discovered that gelatin had a specific “gel-point,” and he also created several mathematical formulas to prove his discovery, as well as other mathematics for related subjects.

In 1940, Paul Flory left the University of Cincinnati and became working at the Standard Oil Development Company’s laboratory. He was in part prompted to change jobs because of the American intervention in World War II. While here, he continued his research on polymers. He worked with many other scientists to develop a type of synthetic rubber. This time, he focused on polymer mixtures. He later came up with a theory for these mixtures.

In 1943, Paul Flory left the Standard Oil Development Company and began working at the Goodyear Tire and Rubber Company research laboratory. He was in part hired because of his work with synthetic rubber. While here, he was the research director of the lab. He was in charge of other scientists who were researching polymers and rubber. He worked here until 1948.

Later on in 1948, Paul Flory had a guest lecturer position at Cornell University. His success in this lectures earned him a teaching position in fall of the same year. While here, he continued his research on polymers, but less so than he had done in the past since he now had the added responsibilities of teaching classes and grading papers. Still, he was able to make some meaningful contributions to science. While here he published some of his lectures and came up with the Flory-Huggins Solution Theory with Huggins. This theory can be summed up with the following equation.

Paul Flory worked at Cornell University until 1957. Later on, in that same year, he began to work at the Carnegie Mellon University as the director of research at the Mellon Institute. He worked here until 1961.

Even after his retirement, Paul Flory stayed active in the scientific community. He worked as a scientific consultant for several companies in the 1970’s.

In 1979, he took on a position working on the Committee on Human rights. He worked on this committee until 1984.

Both during his career and after his retirement, Paul Flory published some papers on his scientific discoveries. Some of his most well-known publications are listed below.

All of Flory’s awards and accomplishments are due to his impressive work in chemistry. Some of his most impressive awards are listed below.

Paul Flory married Emily Tabor in 1936. Together, the couple had three children: John, Melinda, and Susan. All three of his children would later go on to work in a scientific field.