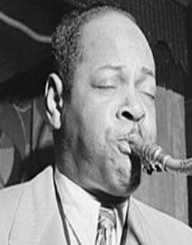 Coleman Hawkins was born on November 21st, in 1904. He earned profound fame for his unique blend of jazz music, bebop, and swing. Hawkins was the first notable celebrity to play jazz music.

Coleman Hawkins was born on November 21st, in 1904 in a place called in Saint Joseph, in Missouri. For his early education, Hawkins enrolled with Topeka High School. After this, he joined Washburn College.

Coleman Hawkins' professional career on stage took off in 1921. He landed on his first major performance with Mamie Smith's Jazz Hounds. By mid the following year, he had cemented his spot with the band. He played with the group for about a year. Soon, he united with Fletcher Henderson's Orchestra. He continued playing with them until 1934.

With time, he also united with the jazz group called the Mound City Blue Blowers and played with them for some time. Hawkins partnership with Henderson worked to his favor. This is because he garnered profound fame as he honed his skills as a soloist.

Subsequently, in 1934, Coleman Hawkins was bestowed with an opportunity to play alongside Jack Hylton's orchestra. After his performance in London, he went to several places in Europe demonstrating his soloist prowess. Around this time, he crossed paths with the likes of Benny Carter and Django Reinhardt. The two were also jazz musicians and that they recorded together in 1937.

In the late 1950s, Coleman Hawkins not only appeared in different jazz festivals, but he also continued recording during this period. Similarly, in the 1960s, he made TV and film appearances.

Coleman Hawkins passed away on May 19th, in 1969. He died at the age of 64. Before his death, his health had considerably deteriorated as a result of his addiction to alcohol.