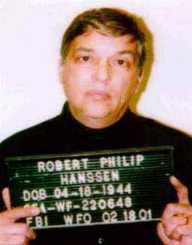 Robert Philip Hanssen was born 18th April 1944, to Howard and Vivian Hanssen. He was born in Chicago, Illinois, in the United States. His father was a member of the Chicago police force.

Robert Hanssen attended William Howard Taft High School and graduated in 1962. He then studied at Knox College, located in Galesburg, Illinois, and he was awarded his Bachelor Degree in Chemistry in 1966.

After graduating college, Robert Hanssen initially applied to the National Security Agency for a position as a cryptographer. Due to budget constraints at the time, he wasn’t accepted.

He then went back to school, to study dentistry at Northwestern University. Three years later, he changed to business. In 1971, Robert Hanssen graduated with an MBA in Accounting and Information Systems.

Robert Philip Hanssen secured himself a position as an accountant but left one year later to join the Chicago Police Department. He was an Internal Affairs Investigator, specializing in forensic accounting.

Robert Hanssen left the police in 1976 and joined the Federal Bureau of Investigation (FBI). He was initially posted at the Gary, Indiana, field office, but in 1978 was transferred to the field office in New York City.

In 1979, Robert Hanssen was moved to the counter-intelligence department, and his project was to compile a database of Soviet intelligence operatives. It was at this time that Hanssen contacted the GRU (Russia’s intelligence agency) and offered his services. He passed a significant amount of information to the Soviets, including the suspected intelligence agents he was adding to his list.

In 1981, Robert Hanssen was transferred again, this time to the FBI Headquarters in Washington, D.C. His new post was in the budget office of the FBI, and this gave him access to information across a wide variety of different operations, including wiretapping and electronic surveillance. He became known by his fellow colleagues as a computer expert.

Robert Hanssen had further transfers, one in 1984 when he was moved to the FBI’s Soviet Analytical Unit, then in 1985, back to the field office in New York. He continued his work in counter-intelligence.

Although he had taken a break from the espionage, Robert Hanssen decided he would take it up again, and approached the KGB in 1985 asking for money in return for information. He gave them the names of three KGB agents who were, in fact, working for the FBI. The agents were recalled to Moscow, charged and two were executed.

In 1987, Robert Hanssen was given the task of looking for the agent who had betrayed the men. In effect, was looking for himself.

In 1989, the FBI was investigating an agent called Felix Bloch who they thought might be a spy. Robert Philip Hanssen notified the KGB who stopped contact with Bloch. Because the contact had stopped, the FBI couldn’t prove the case, and Bloch was never charged. The FBI began a hunt for who had foiled the investigation, and it eventually let them to Hanssen many years later.

In 1990, it was Robert Hanssen’s own brother-in-law that recommended he be investigated by the FBI. He was also an employee of the FBI.

In December 1991, the Soviet Union collapsed. Robert Hanssen sat back for a year to see if there would be any fallout, and when there wasn’t, he took a large risk on more than one occasion to make contact with the Russians.

In 1997, yet another agent reported Robert Hanssen as being a possible mole. The FBI hierarchy was still unconvinced, and no investigation or action was taken. Although he came close to being caught on more than once occasion, Robert Hanssen was able to convincingly lie his way out of the situation, and in 1999, after an eight-year hiatus, he once again became a spy for the Russians.

During the 1990s, while Robert Philip Hanssen was spying through the FBI, he had a counterpart, Ames, at the CIA. Ames was arrested in 1994, and much of the leaked intelligence was blamed on him. There were, though, two cases that he could not have been involved in, one of which was the Bloch case.

The CIA and FBI worked together to flush out possible moles, but once again, Robert Hanssen was not suspected.

They eventually found a Soviet businessman who was also a former KGB agent and paid him 7 million dollars to provide the information that would lead to the discovery of Hanssen as the spy.

The FBI built their case against Robert Hanssen. He did realize towards the end that something was wrong, and on his final drop of information, he was arrested.

Robert Hanssen was able to negotiate a plea bargain, which stopped him from facing the death penalty, but he was sentenced to 15 consecutive “life in prison” sentences, with no parole.

In 1968, Robert Philip Hanssen married Bernadette Wauck, known as Bonnie. She taught theology. She was a devout Catholic, and Hanssen converted to the Catholic faith. The couple had six children.