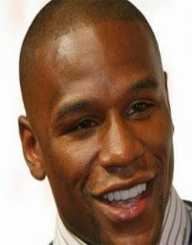 American boxer Floyd Mayweather Jr. was born Floyd Joy Sinclair on the 24 February 1977 in Grand Rapids, Michigan. Sinclar was his mother Deborah’s surname. His mother initially raised Mayweather Jr. in New Brunswick, New Jersey. His mother had a problem with drugs. His father, Floyd Mayweather Snr. was a former welterweight boxer who had once fought Sugar Ray Leonard. His father gave him his first pair of boxing gloves when he was seven years old and taught him to box.  Later Mayweather Snr was incarcerated on drug trafficking charges (1993-1998).

Floyd Mayweather Jr. was a pupil at Ottawa Hills High School, but at 15, he left without graduating.

Mayweather Jr. won the Golden Gloves National Championship in 1993, at age 16.  He won a second time in 1994, and third time in 1996. In 1995, he was the United States Amateur Featherweight Champion. At the  Summer Olympic Games held in Atlanta, Georgia in 1996, Mayweather Jr. won a bronze medal when he beat Lorenzo Aragon from Cuba in a 16-3 bout. His fight against Serafim Todorov of Bulgaria for the silver medal resulted in a split decision, 10-9 in Todorov’s favour. The US team protested the decision, but the result was upheld. Mayweather’s amateur career record is 84 wins, six losses.

Mayweather Jr. defended the title for the final time in November 2001 when he beat Jesus Chavez in a tough bout which was stopped in the 9th round, with Mayweather winning on points. His next fight was in the WBC Lightweight division in April 2002 against the defending champion, Jose Luis Castillo. Mayweather Jr. won the bout and defended the title three times. He fought Philip N’dou in late 2003 which he won. Mayweather Jr. then changed to the super lightweight division in 2004. He beat the reigning WBC super lightweight holder Arturo Gatti in June 2005, and he subsequently won his third, world title which meant that he had won three titles in three separate divisions.

In 2006, Mayweather Jr. won both the World Boxing Council and International Boxing Council welterweight titles after fronting up to Zab Judah on the 8 April in Las Vegas and Carlos Baldomir on the 4 November also in Las Vegas. On the 5 May 2007, he won a split-decision victory over De La Hoya in what was the richest pay-per-view boxing event in on record at the time, winning the WBC junior middleweight title. He retained his WBC welterweight title in December following a points victory over Ricky Hatton in Las Vagas. Following his victory over Hatton, Mayweather Jr. announced his retirement.

There were no fights in 2008. Then in September 2009,  Mayweather Jr. returned to the ring to fight Mexican Juan, Manuel Marquez.  He won and went on to win all his subsequent bouts. In September 2015 after beating Andre Berto, Mayweather Jr. announced that he was retiring.

But by January 2016, Mayweather Jr. was hinting that he would come out of retirement a third time if he could fight Conor McGregor. After much speculation and rumour,  a multi-million dollar contract was subsequently exchanged, and the fight took place on the 26 August 2017. Mayweather Jr. won the bout and retired for the third time. His professional record stands at 50 Wins/0 Losses/27 Wins by KO. His career earnings are estimated to be in the region of $700 million.

Floyd Mayweather Jr. was in a longtime relationship with his high school girlfriend, Josie Harris (1993-2007). They share three children: Zion, Koraun, and Jirah. He has had various partners since Harris but has never married. Mayweather Jr. was found guilty of domestic abuse and served two months in Clark County Detention Center, Las Vagas in 2013.