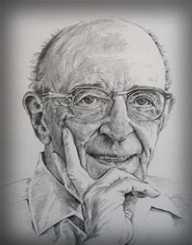 Carl Rogers was able to read before he started kindergarten as he was taught at home from his infancy. His father had a career in civil engineering while his mother was a Christian. Carl was born 8th January 1902 in the Illinois Oak Park area. He had five other siblings while growing up. His family resettled on a farm in the west Chicago area by the time he was ten years old, and he spent the rest of his growing up years there. His Christian upbringing meant he was isolated most of the time and he cultivated self-discipline and independence as a result.

Carl Rogers enrolled at the University of Wisconsin, majoring in agriculture till his graduation in the year 1924. He earned his bachelor’s degree that year and began theology studies at the New York City-based liberal protestant Seminary.Carl was in Beijing in the aftermath of his selection for World Student Christian Federation Conference holding in China. He was there for the next six months and had his worldview broadened by the experience

After competing for two years of study in the seminary, Carl transferred to Columbia University for masters at the Teachers’ College. He completed this degree in the year 1928 and bagged a doctorate in 1931 in the field of clinical psychology.

Carl Rogers 's clinical research was based on a theme he wove around “Rochester Society for the Prevention of Cruelty to Children.“ He worked here as a Director and had all the facilities and faculty available for his research. Roger was exposed to the Rank Theory developed by Otto along with its therapy techniques. He began to consider a different approach after this exposure, and this led him to develop his peculiar theory. Carl Rogers's scholarly work led to the Ohio State University full professorship offer in the year 1940 in the field of clinical psychology. He was also able to offer lectures in the six years to 1940 at the University of Rochester. His publication on the “The Clinical Treatment of the Problem Child” came to light in the year 1939.

Carl Rogers 's thoughts on how a person can have his life transformed through the acquisition of insight from a healthy nonjudgmental relationship with a therapist were published in 1942.This made the waves in the field of Counseling and Psychotherapy. Carl Rogers's work was deepened at the University of Chicago in 1945 when he was invited to establish a counseling center. This became a platform to have his Client-Centered Therapy findings completed and published in the year 1951. All the underlying aspects of the theory got spelled out in this work.

Carl’s voyage in research and exploration of psychology led him to make a return to the University of Wisconsin in the year 1957. This was, however, a period of internal upheaval at the school’s department of psychology. The whole experience left Carl dissuaded a further stint in higher education.

Carl Rogers's stay at the University of Wisconsin in Madison was not without an upside as he completed his book, “On Becoming a Person” at this time. His frontal position as postulated in the book was that people have innate resources that spur personal growth and healing. The essential ingredients for this outcome include empathic understanding, congruence, and acceptance. It also included the unconditional positive acceptance of the therapeutic processes and setting by the client so that an enhanced outcome will be possible.

Carl Rogers's position was that counselors should also maximize each of the identified ingredients so that the client will in the outcome recognize feelings, gain insight and be forward-looking. This process according to Carl, will self-acceptance, self-concept as well as self-actualization.

Carl Rogers's theory was one that resulted from his interaction with clients and his deep probe into the underlying nature of challenges and responses that were noticeable. His well laid –out theories were such that had a basis in logic and could be broadly applied. This synced with the Freudian theory as well. Where Carl differed from Freud was that he classified people as healthy or good. Carl did not view anyone as ill or bad as Freud. His view on mental health was that it was a track in life’s progression. He classified the adverse impact on this progression like criminality, mental illness and any human frailty as distortions of the norm. Carl's simple approach to this theory also makes Freudian theory look complicated.

He identifies the actualizing tendency in every person as the “force of life,” which propels man to reach for the realization of personal potentials. This takes shape as a person strives to optimize the fullness of personal existence. The outcome, in the long run, could be a failure but at least not just by an absence of desire. The kernel of Carl’s theory was to project that every person is in a position to become what they aspire, wish and reach for in life. Carl likened human to flowers that blossom when the right conditions are present. Noting that there are factors that need to be in place for a person to attain to the zenith of personal potential is a vital contribution he made to psychology.

Carl Rogers got married to Helen Elliot before moving to the city of New York. They were both well-acquainted since their childhood days. Although Carl’s parents opposed their wedding, he went ahead with it in the year 1924 they both had a daughter named Natalie and a son, David. He, later on, had six grandchildren.