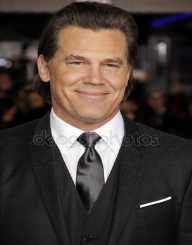 James Josh Brolin became famous when he appeared in the movie The Goonies in 1985. He is an American actor and was born on February 12, 1968, in the St. Monica State, California, United States. Since his first appearance in 1985, he has featured in a number of films and TV shows alongside other actors. Josh has made a name for himself through the roles he played in movies like No Country for Old Men and Men in Black 3. He has also received many nominations and awards including the Oscar, SAG Awards and Academy Awards.

Josh Brolin was born and raised in California to actor James Brolin and Jane Cameron. His birthday is 12 February 1968. As a teenager, Brolin had to put up with living in separate homes since his parents divorced a few years later in the early 1980s. It is when Brolin joined High School that he realized he had a talent and passion for acting.

He made his first appearance in the film ‘The Goonies’ in 1985 alongside Corey Feldman, Martha Plimpton, and Sean Astin. The Goonies grossed over US$60 million with many reviews when it aired at the box office. Josh became even more enthusiastic when he played his second role in the action movie ‘Thrashin’ in 1986. However, Josh thought to himself that he did not do well in the film ‘Thrasin’ and contemplated quitting his career as an actor.

Josh Brolin embarked on his career in 1987 making appearances on television series and shows. His first series was the drama ‘Private Eye’ which rather did not get many reviews because of poor performance. He, later on, took acting roles in other television series including ‘The Young Riders’ (1989-1992),‘Winnetka Road’ (1994),‘Flirting With Disaster’ (1996), ‘Mimic’ (1997), ‘Nightwatch’ (1998), and ‘Mister Sterling’ (2003). These films did not have substantive reviews and were ripped off the air after some time by the box office.

Josh Brolin’s acting career came to an uplift in 2007 while still holding smaller roles in movies like Grindhouse (2007). He also performed alongside Tommy Lee Jones in the film ‘In The Valley of Elah’ (2007). When Josh Brolin appeared in the movie ‘American Gangster’ in 2007, he had attained fame. This exposure saw him work with directors like Joel Coen and Ethan when he co-starred in the film ‘No Country for Old Men.’ His career was almost coming to a standstill when he was involved in an accident, but it is during this hard struggle that he made the best of performances.

Josh Brolin first married Alice Adair in 1988 and divorced her in 1994 with one son Trevor born (1988) and daughter Eden born (1994). Brolin began a relationship after his divorce with Minnie Driver that lasted for six months and married Diane Lane in 2004. The marriage vows were broken through a divorce on November 27, 2013, and Josh married Kathryn Boyd on 24 September 2016.

Josh Brolin has landed into the hands of the law three times and has faced legal charges. First, he was arrested on charges of domestic abuse but was later released. Brolin was also arrested together with Jeffrey Wright and five others at a bar in Shreveport, Louisiana. They were accused of causing havoc at the bar on July 12, 2008, but Josh was freed on cash bond.  Brolin was later arrested in 2013 for causing public intoxication.

Apart from being an actor, Josh Brolin has produced and directed movies like ‘X’ and ‘The People Speak.’