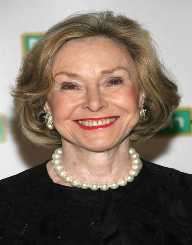 Joan Ganz was born in the city of Phoenix, Arizona, on November 30, 1929. Her father, Sylvan, was a banker. Her mother, Pauline, was a housewife. She studied at the North High School, where she participated in many plays. She started her higher education at the all-girls Catholic Dominican College in San Rafael, California. She then transferred to the University of Arizona. She decided to stop acting because her family did not approve of it. Instead, she started studying to become a teacher, even though she was not truly interested in that profession.

After graduating college in 1951, Ganz got a job as a typist for the State Department in the city of Washington. She soon became interested in journalism, so she moved back to Phoenix and got a job as a reporter at the Arizona Republic newspaper. Less than two years after that, she moved to New York City and started working as a publicist for different television networks. She mostly wrote press releases and synopses for soap operas.

In 1961, Ganz managed to get a job as a television producer for the station WNDT. She had no previous experience with producing. She started producing mostly live debate shows. One of those was called Poverty, Anti-Poverty, and the World. It featured poor people confronting government officials who created anti-poverty programs. For this show, she received her first Emmy award. Apart from debate shows, she also produced documentaries. In 1964, she married Timothy Cooney, a staff member of the mayor of New York City. She took his last name and she is known by it to this day.

In 1966, Cooney met Lloyd Morrisett -one of the executives at Carnegie Corporation, an organization responsible for promoting education. That inspired her to think about television shows whose goal was to educate young children. She believed a show like that could make a genuine difference in a child’s life, as well as society in general. She spent the next summer traveling around the United States and Canada, interviewing experts in education and child development. She gathered everything she found out in a report called “The Potential Uses of Television in Preschool Education”. She described what a show aimed at educating kids would look like. She also proposed the creation of a company that would produce the show.

The station Cooney worked for refused to produce her show. She quit and she started working as a consultant at Carnegie Corporation. She spent the next two years gathering funds and developing the concept of the show together with Morrisett. They also established the Children’s Television Workshop, the company that would produce the show. In 1968, she became its executive director.

The first episode of the show, named Sesame Street, aired in 1969 on PBS. The cast consists of puppet characters called the Muppets. During its first season, it managed to gather large audiences as well as positive reviews. It won three Emmys and a Peabody award. The show is still on the air, making it one of the longest-running television series of all time.

In 1971, Cooney started another education children’s show, The Electric Company. It featured comedy sketches and appearances from superheroes. It achieved quite a success, but it was cancelled after six seasons. After that, she participated in the creation of other similar shows, such as 3-2-1 Contact and Square One TV.

Cooney stepped down from her position as president of the company in 1990. She is still the chair of the executive committee and she is active in the development of Sesame Street.

Cooney received an Emmy Lifetime Achievement Award in 1989. In 1995, President Bill Clinton awarded her with the Presidential Medal of Freedom. She has received numerous other awards and honorary degrees from universities. In 2007, she founded the Joan Ganz Cooney Center, a nonprofit organization dedicated to helping with children’s education.