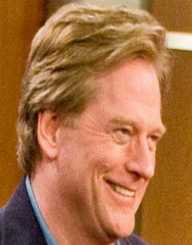 Dean Butler was born on May 20, 1956.  He is a Canadian- American actor. He appeared as starring in ‘Little House on the Prairie.’ He is also a producer and a screenwriter. He is currently sixty-two years of age.

Dean Butler was born on May 20, 1956, in Prince George in British Columbia, Canada. He was brought up in Piedmont, California. He studied and graduated from the University of Pacific.

In 1976, Dean Butler started his career by appearing as an extra in ‘The Streets of San Francisco.’ He also appeared in commercials. In 1978, he co-starred as Michael Wagner in ‘Forever.’  In 1979, he appeared in ‘Little House on the Prairie’ as Almanzo Wilder a role he portrayed until 1983.

Dean Butler also appeared in ‘The Love Boat’ as Brent Harper. In 1987, he featured again in ‘Hotel’ as Gary Marsh. In 1989, he appeared in an episode of ‘ABC Afterschool Specials’ as Matthew Green. In 1990, he appeared in ‘Murder, She Wrote’ as Howard Griffin. In 1991 he featured in the films ‘Shades of L.A’ as Dr. Ted Kolfax and ‘Without a Pass’ as Officer #1.

He has acted as a producer and narrator for the DVD collections of ‘Little House on the Prairie.’ He has two of his production documentaries that are ‘Little House on Prairie; The Legacy of Laura Ingalls Wilder’ and Almanzo Wilder: Life Before Laura.’ In 2012, he was the co-executive producer of PBS’s ‘Pa’s Fiddle: The Music of America.’ He currently produces ‘Feherty’ for the Golf Channel.

In 2001, Dean Butler married actress Katherine Cannon who was acting in ‘Beverly Hills 90210’. They currently live in Los Angeles in California. Butler is presently Sixty-two years of age.