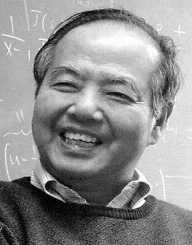 Tsung Dao Lee was born on November 24, 1926, in Shanghai, China. He is a Chinese-American physicist famously known for formulating parity violation, and his works on particle physics, relativistic heavy ion (RHIC) physics and non-topological solitons. He has taught at Columbia University from 1953 to 2012 in the capacity of University Professor Emeritus. He received Nobel Prize in Physics at the age of thirty in 1957 alongside another renowned physicist Franklin C N Yang for their collective work on the violations of the principle of parity conservations. He became a naturalized citizen in America in 1962.

Tsung Dao Lee was born third to Tsing-Kong Lee and Ming-Chang Chang in a family of six children. He was born on November 24, 1926, in Shanghai, China. He went to Suzhou and Jiangxi secondary schools in Shangai before his education was cut short due to the Second Sino-Japanese war. The war affected his graduation from high school, and he never received his diploma.

In 1943, he was accepted into the National Che Kiang University after submitting applications. He purposed to study chemical engineering but later dropped the course to pursue physics under professors Kan-Chang Wang and Shu Xingbei. However, with the outbreak of another war in China, his studies were again interrupted.

In 1945, after the Japanese invasion, Tsung Dao Lee embarked to continue with his studies at National Southwestern Associated University’ in Kunming. He was under the tutorship of Professor Ta-You Wu. He received a Chinese government fellowship through Professor Ta-You Wu to undertake his studies in the United States.

After completing his studies at National Southwestern Associated University, he moved to the United States in 1946. He became a student at the Chicago University under Professor Enrico Fermi. After his thesis submission on Hydrogen Content of White Dwarf Stars, he received his Ph.D. in 1950.

From 1950 to 1951 Tsung Dao Lee served as a lecturer in physics and research associate at the ‘University of California’ at Berkeley. He also took a job at Yerkes Astronomical Observatory in Wisconsin. In 1951 he moved to the Institute for Advanced Study in Princeton and served until 1953 where he also met his former schoolmate at Kunming Chen-Ning Franklin Yang. He started serving as Assistant Professor at Columbia University where he worked on the ‘Lee Model.’ In 1956, he became an Associate Professor and later promoted to the position of Professor in the same institution in 1956. He was the youngest professor then to serve in the University of Columbia until his retirement in 2012.

In 1956, together with Yang, they began focusing on a subatomic particle known as K-meson which they discovered contained two types of K-meson namely theta meson and tau meson. Although the two elements seemed to be the same, their further experiments proved that they had opposite parity with one having even parity and the other one an odd parity. However, their next conclusion was that in some form of reactions parity was violated. They deduced that conservation of parity becomes violated in the nuclear process which emits alpha or beta particles in weak nuclear reactions. This research proved that theta meson and tau meson for some reasons the same particles.

On June 22, 1956, Tsung Dao Lee sent a document titled ‘Question of Parity Conservation in Weak Interactions’ to an American peer-reviewed scientific journal known as ‘Physical Review.’ In 1957, their Lee-Yang theory was validated after many tests at the Columbia University and National Bureau of Standards by Chien-Shiung Wu. His other works include initiating the field of high energy neutrino physics with collaborators in 1960, establishing the KLN theorem alongside M. Nauenberg in 1964, formulating field of non-topological solitons with collaborators in 1975 and developing a procedure to solve the Schrödinger Equation alongside R. Friedberg.

He became the director of the RIKEN-BNL Research Center in 1997 and served until 2003 before becoming the Director Emeritus at the same center.