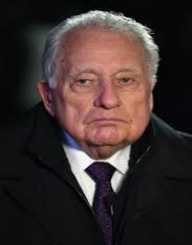 Clint Hill was born on January 4, 1932. He is an American. He is a former Secret Service agent for the United States. He is renowned for his service to five United States Presidents. He was also famous for his bravery in the presidential motorcade during the assassination of President John F. Kennedy. He is currently Eight-six years old.

Clint J. Hill was born Clinton J. Hill on January 4, 1932, in Larimore, North Dakota, United States. He was born to Alma Pettersen. He was later placed in an Orphanage at three months of age. He was later adopted by a Norwegian family.

He later joined Washburn High School. After his high school graduation, he enrolled at the Concordia College, Moorehead, Minnesota. In 1954, he graduated. He later became a Counter-Intelligence Special Agent at the Army. In 1957, he joined the Secret service.

Clint Hill was later assigned to the Denver Secret Service office. In 1958, he became a Secret Service agent for the then President Dwight D. Eisenhower. He was later put to the task of protecting the First Lady, Jacqueline Kennedy after John F. Kennedy was elected the President of the United States.

In 1963, President John F. Kennedy was assassinated in an open limousine in Dallas, Texas. Clint Hill made a possible attempt of saving the president and his wife by jumping to into the over speeding limousine and covering them with his body at the rear seats of the limousine. The Governor of Texas, John Connally, and his wife were at the front seat.

The governor too took a shot. Hills attempt to rescue the President and his wife was not fortunate since the President had taken a head shot. They later rushed to the hospital, but President John F. Kennedy’s condition was too bad that he passed away. After the President’s assassination and the burial, he was honored with his bravery to attempt to save the two.

In 1975, he retired. In 2013, his book ‘Five Days in November’ was published. In 2013, he wrote and released ‘Five Presidents: My Extraordinary Journey with Eisenhower, Kennedy, Johnson, Nixon and Ford’ which was a summary of his career.

In 1963, Clint Hill married Gwen Hill with whom he has two children. He is currently Eighty-Six years of age.