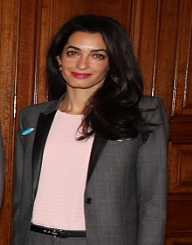 Amal Alamuddin was born on 3rd February 1978, to Ramzi and Baria Alamuddin. She was born in Beirut, Lebanon, and has a sister, Tala, and two half-brothers, Samer and Ziad, from her father’s previous marriage. Her father owned a travel agency, and also worked as a University professor. Her mother is a journalist, of international acclaim.

Amal Alamuddin was born during the Lebanese Civil War, and her family moved to London when she was two years of age.

She attended Dr. Challoner’s High School for her education, and then went to St. Hugh’s College, Oxford, on a scholarship. She graduated in 2000, with a Bachelor of Arts – Jurisprudence. In 2001 she started to study at New York University, School of Law and graduated with a Masters in Law. Whilst studying at New York University, Alamuddin completed clerkships at the International Court of Justice, and also the United States Court of Appeals.

Amal Alamuddin has been admitted to the Bar in both the United States and the United Kingdom. She has also practiced in The Hague, in international courts, such the International Court of Justice.

Amal Alamuddin became a barrister in London when she returned to the UK in 2010. She worked for Doughty Street Chambers.

In early February 2014, Amal Alamuddin was appointed by the Office of the UK Attorney General, for the five year period, 2014 to 2019, to the C Panel of the Public International Law Panel of Counsel.

Amal Alamuddin has done a lot of legal work with the UN, and also on Human Rights’ issues. She was appointed as adviser to the special envoy of Kofi Annan on Syria in 2013, and also as Counsel in the 2013 Drone Inquiry by UN human rights rapporteur, Ben Emmerson, QC in relation to drones being used in counter-terrorism operations.

In 2015, Amal Alamuddin began working on behalf of Armenia, to have the Armenian Genocide, as committed by Turkey, officially recognized.

She also filed another case in 2015, to the United Nations Commission on Human Rights, in relation to the former Philippine president, Gloria Macapagal-Arroyo, who was still being held in detention. The UN Working Group on Arbitrary Detention found that the detention violated international law.

The following month, Amal Alamuddin was appointed as part of the legal team representing Mohamed Nasheed. He was the former president of the Maldives, and he was also in ongoing detention. It was believed his sentencing was politically motivated.

Amal Alamuddin has worked with high profile clients such as the financial group, Arthur Andersen, and Enron.

One of her most high-profile clients, is Julian Assange, the founder of WikiLeaks, in his case against extradition.

Amal Alamuddin represented Canadian journalist, Mohamed Fahmy, who was being held in Egypt, along with several other journalists. He was sentenced to three years in prison but was pardoned by the Egyptian president, Abdel Fattah al-Sisi.

In the spring academic semesters of 2015 and 2016, Amal Alamuddin attended the Columbia Law School’s Human Rights Institute as a faculty member and senior fellow. She taught on human rights litigation.

Amal Alamuddin also delivered lectures on international criminal law at several colleges, including, University of London, The Hague Academy of International Law, and Law School of the School of African Studies.

In April 2014, Amal Alamuddin became engaged to actor, George Clooney. They married in August 2014, in Venice. The couple is expecting their first child in 2017.

Amal Alamuddin co-founded the Clooney Foundation for Justice, with her husband. The foundation is to fight for justice, not only in courtrooms but communities and classrooms, all over the world.

She has also founded the Amal Clooney Scholarship, in partnership with the Aurora Humanitarian Initiative, which selects one female student each year from Lebanon, and gives her the opportunity to attend the United World College Dilijan to complete a two-year baccalaureate program.