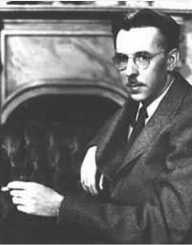 Author and cartoonist James Thurber was born on the 8 December 1894 in Columbus, Ohio. His father, Charles Thurber, was a clerk in the civil service and his mother, Mary Fisher Thurber had a strong influence on his writing. He had two brothers, Robert and William. During his childhood, Thurber lost an eye in a childhood game.

As a boy, James Thurber went to the Sullivant School, and later Thurber attended Ohio State University between 1913 and 1918. He was editor-in-chief of the campus humor magazine, Sundial. He left without obtaining his degree.

Immediately after his studies, James Thurber worked as a code clerk in Washington, D.C. for the State Department. From November 1918 until March 1920, he worked at the American Embassy in Paris, France. He then returned to Columbus and got a job as a journalist at The Columbus Dispatch.

During his time at the Columbus Dispatch, Thurber was involved with the Strollers and Scarlet Mask theatre groups and met his first wife, Althea Adams. The couple moved to France, where he worked for the Chicago Tribune in Paris. In 1926, they returned to the United States and settled in New York City. Thurber got a job for the New York Evening Post and also started freelancing at the same time. He was then offered a job at the New Yorker, and it was around this time he started working on a book with E.B. White. The book was entitled Is Sex Necessary? Thurber’s cartoons began to be used in the New Yorker and made the cover a few times. He left the New Yorker in 1935 but continued contributing to the publication.

In the late 1930s, Thurber co-wrote a play with Elliot Nugent entitled The Male Animal. The play was a success on Broadway, with 243 performances in its first season 1939-1940. In 1942, it was made into a film starring Olivia de Havilland and Henry Fonda.

Thurber was the author of dozens of books. One of his books My World and Welcome To It was made into a television series and won the Best Comedy Series at the Emmy’s in 1970. The Secret Life of Walter Mitty has twice been made into a film. The 1947 version starred Danny Kaye, and in the 2013 adaptation, Ben Stiller played Thurber. With his short stories, cartoons and writing Thurber was recognized as the humorist of his generation.

James Thurber received many awards and honors including a Doctorate of Letters from Kenyon College in his home state of Ohio. Williams College Massachusetts followed with his second honorary doctorate in the same year. In 1953. Yale University also awarded him a doctorate, and he also received the Ohioana Sesquicentennial Medal that year. Thurber won a Tony Award at A Thurber Carnival.

Althea Adams and James Thurber married in 1922. They had a daughter, Rosemary, born on the 7 October 1931. In 1935, the couple divorced, and shortly afterward, Thurber married Helen Wismer. Thurber and his second wife settled in Connecticut and remained married until his death. Thurber had a brain hemorrhage and was recovering when he contracted pneumonia and died on the 2 November 1961.

James Thurber was hit in the eye with an arrow as a child which resulted in blindness in the injured eye. In the early forties, he started to experience trouble with his other eye. Thurber began using a Zeiss loupe so that he could continue to draw. In 1944, he became seriously ill with pneumonia and also had problems with his appendicitis. Later he developed thyroid problems.

Thurber Theatre, Drake Union, Ohio is named after him. His former home is now known as Thurber House, a museum and literary arts center focusing on his life and art. In 1994, James Thurber was featured on a US Postal Service Commemorative Stamp.