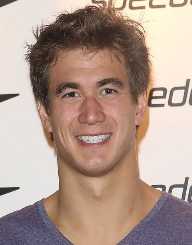 Nathan Adrian was born on December 7, 1988, in Bremerton, Washington, USA. His parents are Cecilia and James Adrian. His siblings, who are also professional swimmers, are Donella and Justin Adrian.

As a teenager, Nathan Adrian attended Bremerton High School. While there, he was a  member of a swimming team. He later graduated from this school in 2006.

As a young adult, Nathan Adrian began to attend the University of California, Berkeley in 2006. While here, he was a member of the school’s swimming team. While on the swimming team, in college, he broke some records. He later graduated from this school with a pre-med degree in 2012.

Nathan Adrian first performed in the Olympics in the 2008 summer games in Beijing. He played as a member of the American team. While it was only his first time at the Olympics, he still managed to earn a gold medal in the 400-meter free race.

Nathan Adrian returned to the summer Olympics again in London in 2012. Again, he played as a member of the American team. This time, he competed and earned medals in several events. He earned gold medals for his participation in the 100-meter free and the 400-meter medley. He also earned a silver medal in the 400-meter free race.

Outside of the Olympics, Nathan Adrian continues to swim professionally. He first started to compete in competitions when he was only five years old, but it wasn’t until after college that he started to perform in serious competitions. It wasn’t long after graduating from college that he joined the United States Freestyle Relay team, around 2009. With this team, he performed in some competitions and races, including the ConocoPhillips National Championships.

Throughout 2010 and 2011, Nathan Adrian continued to compete in various races and championships, including the FINA World Championships, in which he places in several of the races, including the freestyle relay. He was also in several team events, in which he competed in mostly freestyle races, ranging from 50 to 400 meters per race. However, Adrian took a short break from his professional swimming career as he prepared for and played in the 2012 London Summer Olympics.

In 2015, Nathan Adrian competed at the United States National Championships. While at this competition, he won first place in both the 50 and 100-meter freestyle races. These wins qualified him to later compete in the 2013 World Aquatics Championships. While at this competition, he competed in a relay race with Anthony Ervin, Jimmy Feigen, and Ryan Lochte. He also had a solo race in the 100-meter freestyle. He finished this race with a bronze medal.

Nathan Adrian’s next major competition was in 2015 when he swam at the 2015 World Championship. While in this competition Nathan Adrian again swam in team relays (with Lochte, Missy Franklin, and Simone Manuel). In this team race, the team broke a world record with their speed. He also had another team relay race with Kevin Cordes, Ryan Murphy, and Tom Shields. In the solo race, he earned second place.

Nathan Adrian’s awards are all for his accomplishments in swimming. Some of his most impressive awards (excluding his Olympic medals) are listed below.

Neufeld Scholar-Athlete of the Year Award (2011)

Golden Goggle Award for Race of the Year (2012)

Nathan Adrian was inducted into the Robert Chinn Foundation Asian Hall of Fame in 2014.