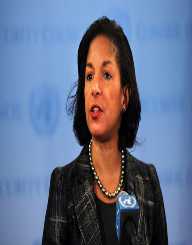 Susan Elizabeth Rice was born on November 17, 1964, in Washington DC, United States of America. She was born to Emmett J. Rice who was the second black governor of the Federal Reserve System and Lois Dickinson. When she was ten years old, her parents divorced. She attended the National Cathedral School in Washington DC where she was a student council president, athlete, and valedictorian. She later joined Stanford University where she got a Truman Scholarship. In 1986, she graduated from the school with a BA in history. At the university, she got membership into the Phi Beta Kappa fraternity.

Rice later attended New College, Oxford vide a Rhodes scholarship. In 1988, she earned an MPhil from the university. Two years later, she received a DPhil from the same institution. Her dissertation ‘Commonwealth Initiative in Zimbabwe, 1979-1980: Implication for International Peacekeeping’ was honoured by the Chatham House, Royal Institute of International Affairs. In 1988, she was a foreign policy aide to Michael Dukakis during the elections. In 1990, she became a management consultant at McKinsey and Company. She worked there until 1992.

In 2001, she became the managing director and principal at Intellibridge until 2002. The following year, she became a senior fellow at the Brookings Institution in the foreign policy program. In 2004, she was appointed as a foreign policy adviser for John Kerry during the elections. In 2008, she became a senior policy adviser to Barack Obama in his presidential campaign. In the same year, she became a member of the advisory board of the Obama Biden Transition Project. The same year also saw her being appointed as the United Ambassador to the United Nations by President Barack Obama.

In 2013, Susan Rice replaced Tom Donilon as the National Security Advisor. In 2017, she became a Distinguished Visiting Research Fellow in the School of International Service at American University. Currently, she is a member of the Board of Directors at Netflix.

In 2002, Susan Rice was inducted into the Stanford Black Alumni Hall of Fame.

Susan Rice got married to Ian Officer Cameron on September 12, 1992. They were married at the St. Albans School Chapel. Together they have two children, John David Rice Cameron and Maris. She loves playing tennis when she is free. She is currently fifty three years old.