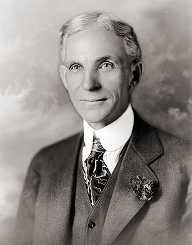 After graduation in 1897, John Rockefeller Jr joined his father’s company and became a director of Standard Oil. After a nervous breakdown in 1904, Rockefeller, Jr found his role concentrating on philanthropic work. Working with Frederick Gates, one of his father’s advisors, he founded the Rockefeller Institute for Medical Research. The General Education Board, the Sanitary Commission for the Eradication of Hookworm and the Rockefeller Foundation.

John Rockefeller Jr rose to prominence during the United Mine Workers Strike 1915. In April 1914 striking workers clashed with the Colorado National Guard in at Colorado Fuel and Iron owned by the Rockefeller family. The incident became known as the Ludlow Massacre where eleven children and two women were killed. John Rockefeller became reviled and hated because of the event, and Rockefeller Jr. entered into negotiations with the union and also appeared before the U.S. Commission on Industrial Relations. He impressed the commission, the union, and public with his frank, open attitude.

It was after this that John Rockefeller Jr began moving a sizeable portion of his fortune under his son’s control. Starting in 1916, by 1922 the funds under Rockefeller Jr’s control amounted to half a billion dollars.

John Rockefeller Jr is acknowledged as one of the most generous philanthropists in the field of conservation and donated around $45 million to various projects and programmes. Other projects include the building of a museum at Yosemite National Park, his involvement in the creation of Mesa Verde National Park, the Great Smoky Mountains National Park and the Shenandoah National Park. He was also involved in the buying of land for Humboldt Redwoods State Park in California.

John Rockefeller Jr was involved in the preservation of Williamsburg Virginia where he donated $60 million for the conservation of the historic town. He did not limit himself to national projects and was also involved in the restoration of Notre-Dame Cathedral in France in the aftermath of World War 1. He helped rebuilt Tokyo University’s library after it was destroyed by an earthquake. In Athens, Greece his foundation provided grants for the excavation of the Ancient Agora of Athens. He also provided funds for the Palestine Museum in Jerusalem.

While John D Rockefeller Jr’s interest in art tended towards the classic, his wife Abby Aldrich was enthusiastic about modern art, and she supported young artists on an allowance her husband gave her. She was involved in the founding of the Museum of Modern Art in New York in 1934. After the death of Aldrich in 1948, Rockefeller Jr continued donating to the Museum of Modern Art in memory of his wife.

When the League of Nations was set up, Rockefeller Jr provided funds for a library. He was also responsible for the real estate upon which the United Nations building was constructed.

He was the founder of the Council on Foreign Relations and was also involved in providing facilities and housing for students on campuses across the country. He also founded the International Education Board which operates in thirty-nine countries.

Assisted by his son Nelson, in 1946 John Rockefeller Jr purchased land along the East River of Manhattan from William Zeckendorf for $8.5 million. This property was later donated and used for the United Nations Headquarters in New York.

His first wife was Abigail Aldrich whom Rockefeller Jr married on the 9 October 1901. The couple remained married until her death from a heart attack in 1948. They had six children together, four sons: John III, Nelson, Laurance, Winthrop, and David and a daughter Abigail.

In 1951 Rockefeller Jr remarried. His new wife was Martha Baird, and they remained together until his death from pneumonia on the 11 May 1960.

John Rockefeller Jr was raised as a Presbyterian. He was a religious young man and attended Bible classes while studying at Brown University.