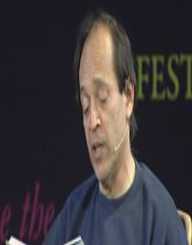 Vikram Seth is the son of Leila and Prem Seth. He was born in the Indian state of Calcutta on the 20th day of June in the year 1952. They lived in Bata Shoe Company town of Batanagar, Danapur near Patna and many other cities globally, including London. Vikram Seth attended in these schools in Patna: St. Michael’s School and St. Xavier’s School.Seth also was at The Doon School, Dehra Dun. Afterwards, Seth studied at the Tonbridge School in England and completed his A-Levels.

Vikram Seth studied Philosophy, Politics, and Economics after his high school graduation at Corpus Christi College, Oxford. In 1975, Seth graduated with a Bachelor’s of Arts Degree. Vikram continued his studies at Stanford University from 1975 to 1986 to pursue his Ph.D.

In 1980, Vikram Seth wrote poems that were published in his initial printed work - called, ‘Mappings.’ This happened during his time at Stanford University in the United States. Also, Vikram did not get good reviews from his critics. Throughout this period, he was involved in the field of creative writing and was a Wallace Stegner Fellow. Vikram did field research from 1980 to 1982. Although Vikram never wrote his doctoral dissertation, he traveled widely across China collecting materials for his studies. Vikram studied classical Chinese poetry and language at Nanjing University.
Seth published his second book, ‘From Heaven Lake’ in 1983. The book was about getting a ride on his journey from China to India. The book was highly admired and consequently got his work noticed Vikram published another collection of his poems in 1985 called, ‘The Humble Administrator’s Garden.’

Vikram Seth published a unique novel entitled, “The Golden Gate” in 1986. The whole story was written in verse and dealt with the lives of people in Silicon Valley. It was a novel encouraged by Aleksandr Pushkin’s work, Eugene Onegin. It was a successful novel, and the literary press gave him rave reviews for the work. Vikram Seth printed another book of poetry in 1990, ‘All You Who Sleep Tonight.’ Then in 1992, Seth published a collection of poems entitled; ‘Three Chinese Poets.’

Seth published a children’s book called “Beastly Tales from Here and There” also in 1992. In this book, he wrote ten animal stories. Vikram created his most famous work an epic novel titled ‘A Suitable Boy’ in 1993. The story tells about the complex familial structures in post-independence  India. The book is one of the longest novels ever published in the English language; it consists of 1349 pages. In 1994, Vikram Seth published another collection of poems entitled ‘The Frog and the Nightingale.’

Vikram published in 1999 a novel about a professional violinist and his love to Julia, a pianist called ‘Equal Music.’ It was an excellent novel and well received by musical admirers. Vikram Seth was greatly cherished for the precision of his depictions of music. Seth's second non-fiction work, ‘Two Lives’ was published in 2005. The book is the story of his great uncle, Shanti Behari Seth and his great aunt a German Jewish, Hennerle Gerda Caro. Vikram is presently writing a continuation to ‘A Suitable Boy’ titled ‘A Suitable Girl’ which could be published in 2016.

Vikram Seth won the Thomas Cook Travel Book Award on his travel book “From Heaven Lake: Travels Through Sinkiang and Tibet” in the year 1983. It was his first well-liked successful book. It was based on his insight as a person. He is truthful about the real situation of living abroad but not particularly as a diaspora. This is the typical subject in his poetry and not in his fiction. Vikram Seth's most significant work as a writer is undoubtedly the novel ‘A Suitable Boy.’ In English language, it is one of the longest novels ever written. The story is based on India’s political issues. It was the time leading up to the first post-independence national election in 1952.

Vikram Seth won the Sahitya Akademi Award in 1985. It was an Indian literary accolade for his book ‘The Golden Gate.’ Vikram Seth’s novel-in-verse book ‘Golden Gate’ was modified into an opera with music by Conrad Cummings and Libretto in two acts. It was adapted by the composer in 2010 in development by LivelyWorks and American Opera Projects. In January 2010, the book received a staged workshop production at the Rose Studio at Lincoln Center in New York. Seth received an Order of the British Empire, in 2001. Vikram was conferred India’s highest civilian honor - ‘Padma Shiri.’

Vikram Seth studied at The Doon School in England. While at the school he served as editor of the school’s newspaper. Vikram Seth is an Indian writer and poet. He won a 1999 crossword Book Award for his novel ‘An Equal Music.’ He is widely acclaimed for his poetry collection book ‘The Humble Administrator’s Garden.’ Seth is a multilingual having studied French, Welsh as well as German. He was exhaustive about his linguistic forays in a 2005 interview by an Australian magazine, “Good Weekend.” Seth is also well versed in Mandarin, English, and Urdu. He can read and write copiously in Nasta’liq script as well as Hindi. Also, he reads and writes in the Devanagari script.
Seth sings German lieder, mainly Schubert. He plays the Indian flute and cello.

Vikram Seth has two younger siblings: Shantum and Aradhana. Aradhana is married to an Austrian diplomat. He is a film-maker and was credited for Earth and Fire, a movie by Deepa Mehta. Vikram Seth is forthright about being gay. He is in a long-term relationship with Philippi Honore: a French musician, who is also known as a violinist.