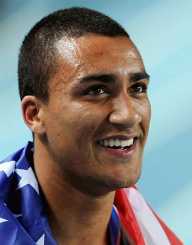 Ashton Eaton a former American decathlete and a two-time Olympic champion. Born on January 21, 1988, he is the world record holder for the decathlon and indoor heptathlon events. Ashton Eaton was the second aside Roman Sebrle to break the 9,000-point barrier with a record point of 9,039. Ashton Eaton broke his own record after scoring 9,045 points on August 29, 2015. Ashton Eaton took up decathlon while at the University of Oregon and became a five-time NCAA champion and awarded The Bowerman award in 2010. His maiden international medal was at the 2011 World Championships, where he won silver.

Ashton Eaton broke and set new personal and world record during the 2012 World Indoor Championships and at the Olympic trials. His first Olympic medal was at the 2012 Summer Olympics in London and defended it during the Rio 2016 Olympics. This made Eaton the third Olympian aside from Bob Mathias and Daley Thompson to win a gold medal in decathlon back-to-back. On January 3, 2017, Ashton Eaton retired from the game.

Ashton Eaton was born on January 21, 1988, in Portland, Oregon as the only child of Roslyn Eaton and Terrance Wilson. Born to an African-American father and a white American mother, Ashton Eaton was born into a family of athletes. His maternal grandfather, Jim Eaton played football, his father also played football and mother was an athlete and dancer. When he was two years, his parents got divorced, and Roslyn left for La Pine, Oregon. Ashton Eaton showed his athletic prowess from childhood and was involved in running, soccer, wrestling, and basketball. He relocated with his mother to Bend, Oregon while in fifth grade. He attended Mountain View High School where he got involved in sporting activities.

Ashton Eaton trained under Coach Tate Metcalf and John Nosler in field and track events. He competed and won the 400 m championship with 48.69 seconds and in the long jump championship with 24 feet 0.25 inches during the 2006 state high school events. After high school, few colleges recruited him and at a point considered playing football at a Division III college. Ashton Eaton was, however, convinced by coach Metcalf to try decathlon in college and suggested he chooses a university with a strong decathlon program. Hence Eaton enrolled at the University of Oregon.

Considering Metcalf’s advice and suggestions, Ashton Eaton enrolled at the University of Oregon where he was primarily trained by Dan Steele, the associate director of track and a former decathlete. His performance under Steele improved astronomically on track events including 1500m, high jump, pole vault and hurdles. Steele left Oregon in 2010 for University of Northern Iowa and was replaced by Harry Marra, who also helped Eaton improve his performance further.

Ashton Eaton won the NCAA Men’s Outdoor Track and Field Championship’s decathlon in 2008 and defended it in 2009 and at added the heptathlon title. Ashton Eaton continued with his impressive performance at the 2010 NCAA Indoor Championship where he broke the heptathlon world record with 6,499 points. He again won the June 2010 NCAA decathlon on a three straight term becoming the first male athlete to achieve that feat. This achievement propelled him to win The Bowerman in 2010.

After graduating from the university, Ashton Eaton then pursued a full-time international career, even though he has been involved in that during his university days. He competed in the 2008 United States Olympic Trials placing fifth with 8,122 points. Ashton Eaton gained 8,075 points to place second at the 2009 USA Outdoor Track and Field Championships to qualify for the 2009 World Championships in Athletics, in Berlin to place 18th. Year in and out, Eaton continued to improve on his performance.

Ashton Eaton was able to qualify for the 2012 Summer Olympics after an impressive trial and setting new records. During the tournament, the only rival he had to deal with was his teammate, Trey Hardee. Ashton Eaton started impressively with a 10.35 time for the 100 m and an 8.03 long jump, which was about half a meter farther than other competitors. For the shot put, he made a 14.66 about 12 cm less than his personal best and also made 2.05 for the high jump. Ashton Eaton continued with his performance during the second day and subsequently won the gold medal. Eaton continued his winning way at the 2016 Olympic games in Rio to win gold at the event.

Ashton Eaton competed in the in the 2014 IAAF World Indoor Championships in Sopot, Poland, held in March. He won gold at the event with a total point of 6,632 which was the all-time second best. Andrei Krauchanka of Belarus placed second with a national best of 6,303 points, and Thomas Vam Der Plaetsen of Belgium fell third with 6,259 points, which was also Belgian national record. Ashton Eaton competed and won the 2015 world title in the decathlon in Beijing with a personal record of 9045 points. He was set to compete in London 2017, but on January 3, 2017, he announced his retirement from the game.