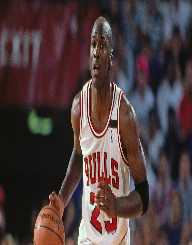 From an early age of 21, Michael Jordan had begun making a name for himself in the world of Basketball. This American basketball legend was born on February 17th, 1963. His place of birth was in Brooklyn, New York. After grabbing several awards while playing for his college team, he decided to focus on his basketball talent entirely.

Michael Jordan joined NBA Championship and began to compete as one of the best rising stars in the field. Jordan was however not selected by the best NBA teams to play for them. This did not deter him from rising to become a legend. His talents gave him recognition by playing for Chicago Bulls.

With his basketball prowess, Jordan changed the fate of his team. They won more championship games each time they played. His Chicago Bulls team made it to the playoffs thanks to Jordan’s efforts. He also went to win NBA Rookie of the Year Award. In addition to this, he also had 5 MVPs and 3 All-Star MVPs behind his name. With such recognition, Jordan had already become a legend.

Michael Jordan was born on February 17th, 1963. His father and mother were James and Deloris respectively. Jordan’s father worked in the electrical industry while the mother was a banker. In a family of 5, Jordan was the fourth son. His brothers are Larry Jordan and James R. Jordan while Deloris was his older sister. Roslyn was the last born to Jordan’s family.While Jordan was still young, they shifted to Wilmington, North Carolina.

While at Wilmington, Michael Jordan went to Emsley A. Laney High School. This is where he explored his love for sports. He played several games including baseball, football and basketball. In spite of this, he had the particular interest in basketball. His parents had raised him with the mentality of working hard and living an independent life. While in high school, he wanted to play for the elite basketball team but he was excluded continuously due to his short height.

Jordan never lost hope; he opted to join the junior team and work his way up. His basketball prowess did not go unnoticed as he was chosen to join the 'McDonald's All-American Team.’ As a high school, senior young Jordan was playing for several college teams including ‘Syracuse,’ ‘Virginia,’ ‘North Carolina,’ and ‘Duke.’His hardworking efforts finally paid off in 1981 when he was offered a scholarship to study in University of North Carolina.

Michael Jordan pursued cultural geography in this university. While playing for his university team, he also made a name for himself as he went to win Freshman of the Year Award. In 1982, while competing in NCAA Championship finals against Georgetown University, Jordan played a significant role in helping his team win the trophy. In subsequent years, Jordan was identified as the NCAA College Player of the year. This was in 1983 and 1984.

In 1984, Michael Jordan wanted to realize his NBA dream as he decided to drop out of the university to fully focus on his talent. He had to prove himself as he was chosen by the not-so-popular team Chicago Bulls. Undeniably, Jordan’s basketball talent got his team to the playoffs. Scoring an average of 28.2 baskets in every game, he was taking his team to greater heights. Awards kept coming as he earned the NBA Rookie of the Year for helping his team reach the playoffs. Aside from this he was among those chosen for All-Star Game.

After making a name for his team, Jordan went back to the university in 1985 to complete his degree. He still continued to play as a professional basketball player. The season beginning in 1986 to 1987 was a record-breaking one for Michael Jordan. Scoring over 3000 points in the same season, he had become famous as he was being compared to Wilt Chamberlin. In the 3rd season, this was the period when Jordan earned his first MVP award. He did not do this once or twice. He went to win this award in 1991, 1992, 1996 and 1998.

In the 1990-1991 season, Michael Jordan helped his team yet again in not only sailing through the playoffs, but they also got to the finals this time. This was the ‘Eastern Conference’ finals. They defeated ‘Los Angeles Lakers’ in the finals to bag they're first ever major NBA trophy. The following seasons in 1992 and 1993 were also victorious. This is because Chicago Bulls went to win their second and third NBA Championship titles.

Unfortunately, in 1992 to 1993 season, Jordan lost his father. He had been attacked during a robbery and was shot by two teens. This was a hard time for Michael Jordan as he surprised many by retiring from Basketball. Surprisingly, he now wanted to pursue his baseball career. For an entire year, Jordan played for the Birmingham Barons.

Back to the NBA

Without Michael Jordan in the Chicago Bulls team, they struggled a lot. In 1994 to 1995 season, they had to fight to the playoffs. Luckily, Jordan came back to their rescue. Following his earlier retirement, Jordan chose not to wear the same jersey number 23 again. Instead, he went for the jersey number 45 that he wore when he played baseball for the Birmingham Barons. He came with a significant impact as his team won the championship in the following 1995-1996 season.

It did not take time before Michael Jordan retired again. After seeing his team win several titles after coming back, he retired after featuring in 1997 to 1998 season. He did not go far off from the basketball arena. Jordan soon became the president of the Washington Wizards. He partly owned this team while still acting as the president.

For the love of the game, in 2001 Jordan was back again in the court. He featured for the Washington Wizards for the coming two seasons. In 2003, he made his final decision of hanging up his basketball jersey in 2003.

Michael Jordan was successful as a basketball manager. In 2006, he managed Charlotte Bobcats basketball operations after buying a share of the club. Still, in the same year, Jordan faced specific personal issues as his marriage with Juanita Vanoy came to an end. The couple had been together for 17 years. Together, they had two sons and one daughter. Jeffery Michael is the eldest son followed by Marcus James and their daughter Jasmine.

As part of his legacy, Michael Jordan made it to the Naismith Memorial Basketball Hall of Fame in 2009. There were twisted emotions for him during induction of this award as it meant the end of a successful basketball career. In 2010, he took over a more significant share of Charlotte Bobcats.

Apart from this, Jordan is successful in his external businesses. He owns some restaurants and engages in charity. Recently in 2016, Michael Jordan was honored by being offered the Presidential Medal of Freedom award by former US president Barack Obama.