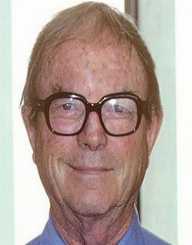 Charles Martin Jones was an award-winning American filmmaker, animator, artists, and author. Born on September 21, 1912, he is known for his work with Warner Bros. where he earned critical acclaims for cartoon shorts like Looney Tune and the Merrie Melodies. He created the cartoon characters including the Bugs Bunny, Three Bears, Wile E. Coyote and the Road Runner, Porky Pig, Daffy Duck, and Michigan J. Frog.

After a successful career at Warner, Jones joined Metro-Goldwyn-Mayer to produce some new series of Tom and Jerry shorts and the television adaptation of Dr. Seuss’ How the Grinch Stole Christmas!. He established the studio, Chuck Jones Enterprises in 1970.

Chuck Jones won several awards including three Oscars for the cartoons The Dot and the Line, So Much for So Little, and For Scent-Imental Reasons. In 1996, he was awarded an Honorary Academy Award for his contribution to the animation industry.

Chuck Jones was born on September 21, 1912, in Spokane, Washington to Mabel McQuiddy and Charles Adams Jones with three other siblings. The family later moved to Los Angeles, California. Jones and his siblings gained interest in drawing at a very young age as their father supplied them with many good stationaries from his business and compelled them to use it as early as possible.

He also enjoyed watching comedians like Charlie Chaplin and Buster Keaton perform before the cameras on the local streets of Los Angeles. This ultimately influenced his sense of humour. Jones entered the Chouinard Arts Institute during which he also worked part-time as a janitor. After graduating, he was offered a job at Ub Iwerks studio, where he started as a cell washer. He worked his way up to become an animator


The career with Warner Bros

In 1933, Chuck Jones began working as an assistant animator for Leon Schlesinger Productions, an independent studio which produced Merrie Melodies and Looney Tunes for Warner Bros. Committed to his job, Jones gained promotion to animator in 1935 and started working with studio director, Tex Avery. Three years later, he became an animation director at Schlesinger.

He made his directorial debut with the short, The Night Watchman, 1938. In 1939, he created his major debut character, Sniffles that starred in twelve Warner Bros. cartoons. He also created characters like the Daffy Duck, Charlie Dog, Hubie and Bertie, Bugs Bunny, The Three Bears, and Pepe LePew. Others include Wile E. Coyote, Marvin Martian, Marc Anthony and Pussyfoot, and Michigan J. Frog among others.

Chuck Jones worked with Theodor Geisel (also known as Dr. Seuss) to create the Private Snafu series of Army educational cartoons through the World War II. The two also worked on the animated adaptation of Seuss books like How the Grinch Stole Christmas! in 1966. In 1944, Jones directed the shorts The Weakly Reporter and followed it with Hell-Bent for Election, which was a film for Franklin D. Roosevelt’s campaign.

Chuck Jones collaborated with Les Goldman to form the independent animation studio, Sib Tower 12 Productions. Some former colleague workers at Warner Bros. including Michael Maltese and Maurice Noble joined the studio. In 1963, Metro-Goldwyn-Mayer hired the studio to produce new Tom and Jerry cartoon shorts and a television adaptation of Tom and Jerry theatricals.  After a year of its existence, MGM purchased Sib Tower 12 Production and renamed it MGM Animation/Visual Arts.

Jones directed the animated short film The Dot and the Line: A Romance in Lower Mathematics, which won the Academy Award for Best Animated Short Film in 1965. That same year, he directed the short The Bear That Wasn’t. Jones directed and produced the TV special How the Grinch Stole Christmas!, 1966, Hortons Hears a Who!, 1970, and the feature film The Phantom Tollbooth in 1970. He co-directed The Pogo Special Birthday Special, 1969.

MGM Animation/Visual Arts was closed in 1970 following which Jones formed his studio, Chuck Jones Enterprise. In 1971, he produced the children’s TV series, The Curiosity Shop for American Broadcasting Company. He followed it with animation version of the George Selden book, The Cricket in Times Square. Other works include The White Seal and Rikki-Tikki-Tavi.

Back to Warner Bros. Jones produced the animated adaptation of The Carnival of the Animals, 1976, with characters like Daffy Duck and Bugs Bunny. He went on to create The Bugs Bunny/Road Runner Movie, 1979. In 1997, Jones produced his final Looney Tunes cartoons From Hare to Eternity starring Bugs Bunny and Yosemite Sam.

Chuck James first marriage was to cel painter Dorothy Webster in 1935. The marriage ended when Dorothy died in 1978. Jones then married Marian J. Dern in 1981 until 2002. Chuck Jones died of heart failure on February 22, 2002. His remains were cremated and ashes scattered at sea.