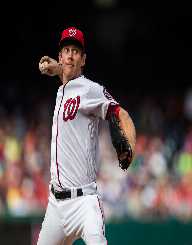 Stephen  Strasburg is an American baseball pitcher for the Major League Baseball’s (MLB) Washington Nationals. Born on July 20, 1988, he made an MLB debut on June 8, 2010, for Washington Nationals after the team drafted him on the first pick during the 2009 MLB Draft. Just some months into his MLB career, he tore an elbow ligament, which required a Tommy John Surgery and subsequent a year rehab. He returned to the league on September 6, 2011. The genesis of his career was during his childhood when he exhibited a great baseball talent as a young chap and with the help of his grandmother, developed his skills to become one of the prolific pitchers currently. He played high school baseball at West Hills High School and his college career with the San Diego State Aztecs.

Stephen  Strasburg won a bronze medal with the United States national baseball team at the 2008 Summer Olympics. In 2010, the ESPN regarded him as the "most-hyped pick in draft history" while Sports Illustrated called him the "most hyped and closely watched pitching prospect in the history of baseball." After returning from injury in 2011, he pitched 24 innings for the year. Stephen  Strasburg, however, started the 2012 season full of energy and agility earning a place in the 2012 MLB All-Star Game.

Stephen Strasburg was born on July 20, 1988, in San Diego, California to Kathleen Swett and Jim Strasburg. His father was a real estate developer and his mother a dietician. Growing up he showed great passion for baseball and his maternal grandmother helped him through. Strasburg, who refers to her grandmother as his biggest inspiration, recalls his grandmother usually played catch and worked on pitching with him. He received education at West Hills High School in Santee, California, where he played in the baseball team. He started his junior year baseball career on a bad note as he posted 1-10 win-loss record.

However, he was able to up his game during his senior year and that drew the attention of scouts especially during a twelve-strikeout game against El Captain High School. His senior year saw him played 7 complete games with a record of 1.68 earned run average (ERA)and 74 strikeouts in 62 1⁄3 innings pitched. He completed high school with three varsity letters and made a record in ERA and shutouts. Strasburg was named West Hills High School’s Scholar-Athlete of the Year in 2006.

Stephen Strasburg unsuccessfully tried to enrol at Stanford University and therefore enrolled at San Diego State University, his parent’s alma mater. He played for the San Diego State Aztecs coached by Base Ball Hall of Famer Tony Gwynn. Strasburg had gained weight and out of shape at the time and pitching collegiate baseless was virtually impossible. He earned the nickname “Slothburg” from his conditioning coach,  DaveOhton, who also asked him to quick baseball. That aside, college life was difficult for him at the start admitting, "I wasn't the most mature guy out of high school. … The dorm was an overload, too much, too soon." To prove his conditioning coach wrong, Strasburg engaged in an intense workout and loss 30 pounds. During his first year with Aztecs, he was used as a relief pitcher, pitching in middle relief at the start of the season.

Strasburg was named Co-Freshman of the Year for the Mountain West Conference. He also played for the Torrington Twisters of the collegiate summer baseball New England Collegiate Baseball League (NECBL) in the summer of 2007. During his second year, he played as a full-time pitcher and continued with an impressive performance and completed his junior year in 200913–1 with a 1.32 ERA, 59 hits allowed, 16 earned runs, 19 walks, and 195 strikeouts in 109 innings pitched. He was awarded the National Pitcher of the Year Award and the Dick Howser Trophy.

On June 24, 2008, he was called to the United States national baseball team for that year’s World University Baseball Championship. The team won gold at the end of the championship. Strasburg was also named in the U.S. national team for the 2008 Summer Olympics in Beijing. At the end of the competition, Strasburg made a 1-1 record and a 1.6 ERA, winning bronze. He went on to receive the USA Richard W. Dick Case Player of the Year in 2008.

He made an impressive start with a record7 innings, with two earned runs, no walks, and 14 strikeouts to pick a win. His 14 strikeouts was a new team record and fell one strikeout behind Karl Spooner and J.R. Richard’s 15 strikeouts for the all-time record for a pitcher's debut. His debut match also came with a record for being the first pitcher in history to strike out at least eleven batters without issuing any walks.

Strasburg impressive season start ended with a tear of an ulnar collateral ligament during a game, which Nationals made public on August 27, 2010. The injury required a Tommy John surgery and up to 12 or 18 months rehabilitation. Before his injury he had pitched in 12 games, all starts, made 68 innings, 92 strikeouts with a 2.91 ERA Strasburg made a rehab comeback on August 7, 2011, for the Hagerstown Suns. He then returned for the 2011 minor league season making six starts and a total of 20? innings, 29 strikeouts, with a 3.49 ERA and a 1–1 record. In the 2011 major league season, he made five starts with the first game against the Los Angeles Dodgers on September 6. He ended the season with 24 innings, 24 strikeouts, with a 1.50 ERA and a 1–1 record.

Since his comeback in the 2011 season, Strasburg has gradually returned to his prolific form and pitching impressively for the Nationals. The 2012 season saw him pitch 15–6 with 159? innings, 197 strikeouts 3.16 ERA, and 1.15 WHIP. He has been able to maintain his form and gunning towards achieving greatness. In a game against San Diego Padres on May 27, 2017, he made a career-high 15 batters in a 3−0 win. He went on to make a franchise record on September 10 with a consecutive inning pitched without allowing a run with 34 innings.

Strasburg married Rachel Lackey son January 9, 2010. The couple met during college days. He chews tobacco and has promised to quit.