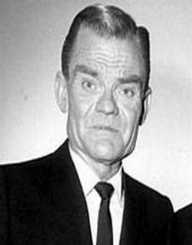 Spike Jones was an American bandleader and musician, known for making satirical songs with unusual sounds.

Lindley Armstrong Jones was born in Long Beach, California, on December 14, 1911. His father, Lindley, was a Southern Pacific station agent. His mother’s name was Ada. He got the nickname “Spike” because he was skinny.

As a teenager, Jones formed a band called Spike Jones and his Five Tacks. He was also a part of several pit orchestras. He then entered Victor Young’s orchestra. After that, he joined the John Scott Trotter Orchestra. He was also part of the backing band for the singer Cindy Walker.

Spike Jones soon became bored of the regular music he played. He gathered up a group of musicians, and they started performing satirical versions of popular songs. They first started this as a hobby. They later signed with RCA Records. The band was named Spike Jones and his City Slickers. Many musicians joined and left the group throughout the years. They sang, and they played the trumpet, the clarinet, the banjo, the violin, the drums, and other instruments.

The band’s first significant hit was the song “Der Fuehrer’s Face.” It mocked Adolf Hitler. It was used in an anti-Nazi cartoon produced by Walt Disney. Their other hits were the satires of the romantic song “Cocktails for Two,” the western song “Ghost Riders in the Sky,” the holiday song “All I Want for Christmas,” and many others.

In 1942, the band recorded many Soundies – short musical films similar to music videos. They appeared on several radio programs such as The Bob Burns Show. They also performed in a few movies, such as Thank Your Lucky Stars and Breakfast in Hollywood. On television, they appeared in variety shows, like All Star Revue and The Colgate Comedy Hour. From 1954 to 1961, Jones had his television series called The Spike Jones Show. He starred in the show with his band and with his wife.

From 1945 to 1948, Spike Jones was a co-host at The Chase and Sanborn Program. It was a comedy and variety radio show. In 1946, he formed a second group, called Spike Jones and his Other Orchestra. He wanted to create more serious music. This band was not very successful. In 1954, he starred in the comedy film Fireman Save My Child.

Jones’ satirical music became less popular with the rise of rock and roll. He recorded a serious Christmas album and a few children’s songs. He also made a few albums with spoken comedy. He formed another group, called Spike Jones’ New Band. They recorded a few covers of popular pop and folk songs.

Spike Jones first wife was named Patricia. They had a daughter called Linda. In 1949, he married the singer Helen Grayco. Their son, Spike Junior, is a producer of live television events. Their daughter, Leslie Ann, is a recording producer with multiple Grammy awards. They also have another daughter called Gina.

Spike Jones smoked heavily. He eventually started suffering from a lung disease. He had to use an oxygen tank. He died on May 1, 1965. He was buried in Culver City, California, at the Holy Cross Cemetery.