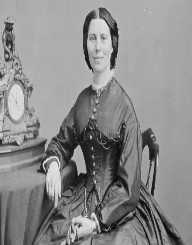 Mary Edwards Walker was an American surgeon, abolitionist, prohibitionist, prisoner of war and a feminist. She was born on November 26, 1832. She was the first woman to receive the Medal of Honor, a record she held until 2017. She earned a medical degree in 1855, got married and started practicing medicine. After the outbreak of American Civil War, she volunteered with the Union Army where she served as a surgeon.

At this time, women and sectarian physicians were considered unsuitable for the Union Army Examining Board. The show of courage earned her a Medal of Honor for her unrelenting efforts in the civil wars. She later became a writer and a lecturer who worked hard to fight for women's rights to vote during America's general election until her death in 1919.

Born on November 26, 1982, in Oswego, New York, Mary Edwards Walker was the youngest daughter among the seven children of Alvah (Father) and Vesta (Mother). Mary Edwards had five sisters and one brother. The parents raised her together with her brother and sisters in New York, in a progressive and revolutionary manner. The raising method instituted a spirit of independence and a desire for justice which she actively practiced throughout her life.

They were raised as Christians, but their parents insisted on free thinking and personal questioning the regulations and restrictions of different denominations. The parents were very non-traditional and could share house chore between themselves. The mother preferred free clothing as opposed to restricting ladies clothing, especially when working on the farm.

Mary Edwards Walker started her elementary education where she attended a local school that her parents had started.

In the late 1930's, her parents looked for a free school to achieve their desire to educate their daughter. Mary was enrolled at her first free schoolhouse in Oswego. After finishing her primary education, she attended Falley Seminary in Fulton, New York. The institution not only offered higher education but also emphasized modern social reform in hygiene and gender roles. The institution's ideologies and beliefs further strengthened Mary's will to fight against traditional feminine opinions and viewed the traditional approach to women in the society as an injustice.

During her free time, Mary Edwards Walker would go through her father's anatomy and human physiology books. This exposure to medical books aroused an interest in Mary to study Medicine. She worked as a lecturer in Minneto, and she managed to earn sufficient money to pay her school fees at Syracuse Medical College currently the State University of New York Upstate Medical University. She graduated from the college as the only woman in her class having achieved honors in 1855.

Mary Edwards Walker also attended Bowen Collegiate Institute (Later Lennox College) in Hopkinton, Iowa, in 1860 after which she was suspended from the school after her adamant refusal to resign from the debating society which was exclusively male until she joined. She later completed second medical diploma from "New York Hygeio-Therapeutic College."

Immediately after graduating, Mary Edwards Walker started her private practice in Columbus in Ohio. She, however, returned to Oswego. She later married a fellow physician, Albert Miller, and they started a joint practice in Rome, New York. The joint venture was unsuccessful.

In 1861, Mary offered herself as a volunteer in the Union Army during the American Civil War. This was an achievement since by then; women were unacceptable in the "Union Army Examining Board." She at first served as a nurse in Manassas at the "First Battle of Bull Run" and later at the "Patent Office Hospital" in Washington D.C

Mary worked as a volunteer surgeon at the "Battle of Fredericksburg" and "Chattanooga" where she worked closely with the Union front lines. She later completed her second medical diploma and started working at Warrenton and Fredericksburg war zones in tent hospitals. The War Department did not approve her desire and requested to work as a spy in 1862.

In 1863, Mary Edwards Walker was recruited by the "Army of the Cumberland" as a civilian contract assistant surgeon. She did serve at the "52nd Ohio Infantry" as an assistant surgeon becoming the first doctor woman in the U.S army. She was courageous and did not mind to risk her life to serve the injured soldiers. On April 10, 1864, she was captured and imprisoned by Confederate Forces after which she became a prisoner of war, in Richmond, Virginia. She was released on 12th August in exchange of a Confederate Surgeon from Tennessee.

Mary Edwards Walker further worked as a female supervisor in Kentucky and head of an orphanage in Tennessee. In 1864, she continued with her service at the "Battle of Atlanta."

While still in prison, Mary suffered from partial muscular atrophy which rendered her disabled. She consequently retired from government service in 1865. On the same year, she was awarded a disability pension of $ 8.50 later appraised to $20.

Mary became an active campaigner and advocated for women's suffrage movement. In 1866, she served as the president of "National Dress Reform Association." She wore men's clothes leading to her arrest on several occasions. She advocated for the freedom to choose what to wear.

Mary Edwards Walker has written several publications including "Hit" and "Unmasked, or the Science of Immortality." On June 10, 1982, she marked the anniversary of her birth. She has issued a postage stamp in her honor.

Mary Edwards Walker was a major crusader for the award of women's rights to vote and participate fully in the electoral process. She also advocated for the freedom to choose the clothes to wear. She wrote books to promote these rights. She achieved this one year after death; women were allowed to vote.

Mary Edwards Walker was awarded the "Medal of Honor for Meritorious Service" by the then President Andrew Johnson for her valued contribution during the war. The honor was revoked in 1917 but later restored in 1977 by President Jimmy Carter.

Mary Edwards Walker was married to a fellow doctor, Albert Miller in 1855. They divorced after thirteen years. Mary died at her home in Oswego, New York, at 87 years and was buried at the rural cemetery.