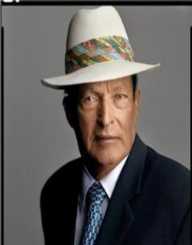 Juan Antonio “Chi-Chi” Rodríguez was born on October 23, 1935, in Rio Piedras, Puerto Rico into a low-income family. He has five other siblings. His father who worked as a cattle handler and labourer earned just $18 a week. At a young age of seven Rodríguez was working as a water carrier in a sugar plantation to help raise money for the family. Rodríguez realised that other people working as caddies earned enough money than he did and therefore decided to become a caddie.

Chi Chi Rodriguez gradually gained interest in golfing and would make a golf club with a guava tree and using an empty can as golf, he practised how to play the game. At the age of nine, he was already a proficient player and was able to score 67 at age 12. At the age of 19 in 1954, Rodríguez enlisted with the US Army. While with the army, he used to practice how to perfect his game during his free hours. After the military service, he returned to Puerto Rico to become a caddie master at the Dorado Beach Golf Club.

In 1960, Chi Chi Rodriguez at age 25, had become a professional golfer and made a PGA debut at that year’s Buick Open. Three years later, he won the Denver Open. Since winning his first PGA, Rodríguez has won seven more until 1979. He adopted a stylish play by putting his hat over the hole when he made a birdie or eagle. However, some golfer started complaining about it and therefore developed a new style. He later came out with his trademark “toreador dance,” which he used to excite his fans. He represented his country on 12 World Cup teams.

In 1985, Chi Chi Rodriguez gained eligibility to play on the Senior PGA Tour (currently the Champions Tour). Moving to the senior level came with great success. He was able to win 22 tournaments from 1986 to 1993. He won the Senior PGA Tour three consecutive times becoming the first player to achieve that feat. In 1987, he made a tour record with eight consecutive birdies en route to win that year’s Silver Pages Classic.

Chi Chi Rodriguez won the Hispanic Recognition Award in 1986 and was named Replica's Hispanic Man of the Year in 1988. He received the Bob Jones Award in 1989 for his distinguished sportsmanship in golf. Rodríguez was inducted into the World Golf Hall of Fame in 1992, becoming the first Puerto Rican to achieve that.

To give back to the society, Chi Chi Rodriguez and former pro boxer, Bill Hayes formed the "Chi-Chi Rodríguez Youth Foundation" at the Glen Oaks Golf Course in Clearwater, Florida. The foundation aims at instilling self-esteem in young people who have suffered abuse and other life difficulties. He made a cameo in the movie Welcome to Mooseport in 2004.

In 1964, Chi-Chi Rodríguez married Iwalani with whom he has a daughter. He suffered a heart attack in October 1998 and recovered fully after undergoing an angioplasty to clear the blocked artery. A three-armed robber attacked him at his house in Guayama in 2010 and made away with $500,000 in cash and jewelry. The robbers tied Rodríguez and his wife during the incident.