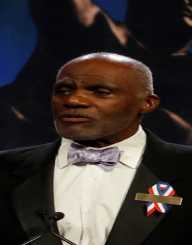 American football player and jurist Alan Page was born on the 7 August 1945.

During his time at the University of Notre Dame, Alan Page was captain of the school football team which won the 1966 national championship. In 1966, he became a college football All-American.

He worked in the media as a sports commentator during the early 1980s and then pursued a legal career. Alan had worked at a law firm between 1979 through to 1984 when his sporting commitments allowed him to do so. In 1985 he was made Special Assistant Attorney General and later became Assistant Attorney General. He was elected Associate Justice of the Minnesota Supreme Court in 1992 and was reelected in 1998, 2004 and 2010. After reaching the legal retirement age for judges in the state, Page retired.

Highly regarded as one of the most impressive defensive linemen ever to play, Alan Page is a member of the Pro Football Hall of Fame (1988) and in 1993 was inducted into the College Football Hall of Fame. He was also presented with the National Football Foundation Distinguished American Award in 2005.

He married Diane Sims, and the couple had four children together.

In 1988, Alan Page and his spouse set up the Page Education Foundation to assist students of color by providing mentoring advice and financial assistance in exchange for community volunteer work.