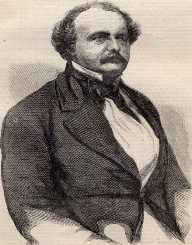 Martin Van Buren was the eight President of the United States of America and a founding member of the Democratic Party. Born on December 5, 1782, he served a term in office from 1837 to 1941. Before rising to the office of the presidency, he served in various capacities including as the ninth Governor of New York, the tenth Secretary of State and eighth Vice President of the country. Riding on the popularity of his predecessor President Andrew Jackson and the strength of the Democratic Party at the time, Martin van Buren easily won the 1836 presidential election to become president.

However, he could not hold onto power due to worse economic condition and the Panic of 1837 and lost Whig Party’s William Henry Harrison during the1840 elections. After losing the elections, he became a strong anti-slavery campaigner. Martin Van Buren returned to the political circle by running on the ticket of the Free Soil Party but only managed to have 10% of the votes. Most historians and political scientists rank his term as president below average.

Martin Van Buren was born on December 5, 1782, in Kinderhook, New York to Abraham Van Buren and Maria Hoes Van Alen a widow of Johannes Van Alen who already had three children. His father operated an inn and tavern in Kinderhook and served as the town’s clerk. Both parents were of Dutch ancestry, which will in the future make Martin van Buren the first U.S. president without a British ancestry or born of British subjects.

He was the third of five children by his parents and had a half-sister and two half-brothers from his mother’s previous marriage. He had early education at a schoolhouse in Kinderhook and later studied Latin at the Kinderhook Academy and Washington Seminary in Claverack.

Martin van Buren studied law at the office of Peter Silvester and his son Francis After completing his formal education, in 1776. Through his studies, he acquired interpersonal communication and oorganizationalskills, which will be to his advantage in his political career.  After spending six years with the Silverstar, he completed his law studies with William P. Van Ness in New York City. He was admitted into the New York ban in 1803 after which he returned to Kinderhook to practise with his half-brother James Van Alen.

Martin van Buren  was politically active since age 18 and combining it with his law practice, he was able to support himself politically. He gained nomination to contest for the New York State Senate in 1812. Despite strong opposition from other Democratic-Republicans, he won the elections to become the states senate. He supported the War of 1812, against Great Britain. In 1915, he was appointed the New York Attorney General, which made him move from Hudson to Albany. The following year he was re-elected as a state senator and maintained his position as the attorney general. The New York state legislature elected Martin van Buren  as the state’s representative in the United States Senate. Moving to the Washington DC, he became a very prominent politician serving as the chairperson of the Senate Finance Committee and the Senate Judiciary Committee. He became known as the Little Magician and Sly Fox.

Governor And Secretary Of State

Martin van Buren  contested and won the 1826 election as the Governor of New York. Hewas sworn into office to start his administration on January 1, 1829, resigning from his Senate position. During his short term in office, he managed to pass the Bank Safety Fund Law. As a staunch supporter of Andrew Jackson during the1828 presidentialelection, he gained his favour after becomingPresident. In February 1929, J Jackson appointed him as Secretary of State and after serving 43 days as the governor of New York, Van Buren resigned to take up his new office.

In 1832, Jackson nominated Martin van Buren  as a runningmate and his position was confirmed during the May 1832 Democratic National Convention.  Van Buren had previously been given arecess appointment as the ambassador to Britain in1831.T he Senate rejected his recess appointment in February 1832a move championed by then-Vice president John Calhoun who was on a mission to kill Van Buren’s political career. Martin Van Buren  had to return from London to campaign with Jackson during the 1832 presidential election. The Jackson-Van Buren ticket won the elections, and in March 1833, Van Buren took office as Vice President.

Andrew Jackson decided not to contest for a third term in office and therefore lend his support to a Van Buren bid during the 1836 presidential election. This was to ensure continuity of his policies. In 1835, Van Buren was elected unopposed as the presidential nominee for the Democrats at the 1835 Democratic National Convention. His vice presidential candidate was Richard M. Johnson.

During the 1836 presidential election, Van Buren received764,198 popular votes representing 50.9 percent of the total votes to win the elections. His win was partly due to the strong support from Andrew Jackson and the inability of the Whig party to fill in a winnable candidate and ineffective organisation.

Martin van Buren  took office in March 1837. His administration was faced by several challenges including the financial panic in 1837, where federal funds were removed from state banks to independent treasury. This resulted in the collapse of banks and businesses with many people losing their land. His popularity also waned with the costly war with the Seminole Indians in Florida and his opposition to the annexation of Texas. His inability to take a strong stance in a border dispute between the U.S. and British government would also cause him politically

Martin van Buren  gained the Democrats nomination for a second term during the 1940 presidential election but lost to Whig Party’s William Henry Harrison. He left office in 1841. After his term, he returned to his “Lindenwald” estate in Kinderhook. He however continued to follow issues in the political circle and tried to maintain his grips on the party.

With his aim to come to the office, Van Buren’s opposition to the annexation of Texas became a disservice to his ambitions. Though he had the support of the anti-slavery leg of the Democratic Party, he lost the favour of the pro-slavery Democrats. During the 1844 Democratic National Convention, he lost to James K. Polk. Polk was in support of the annexation of Texas and Oregon.

In 1848, he a group of anti-slavery Democrats, members of the abolitionist Liberty Party, and Whigs formed the Free Soil Party. Martin van Buren  was unanimously nominated to run on the ticket of the party for 1948 Presidential elections. He managed to get only 10.1% of the total votes. He retired from politics after the elections. He spent his years travelling and later retiring to his home in Kinderhook.

Martin van Buren  married his cousin Hannah Hoes on February 21, 1807, in Catskill, New York. They had five children but four survived childhood namely Abraham, John, Martin Jr., Smith Thompson, and Winfield Scott who died at some months after his birth. Hannah died of tuberculosis at age 35 and Martin never remarried. Van Buren died of bronchial asthma and heart failure on July 24, 1862, at age 79. He was interred at Kinderhook Reformed Dutch Church Cemetery.