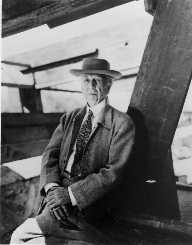 Frank Lincoln Wright was born on June 8, 1867, in Richland Center, Wisconsin. His father was an orator, music teacher, and lawyer. His mother was a school teacher. In 1876, Wright’s mother Anna visited the Centennial Exhibition in Philadelphia. She saw an exhibition of educational blocks created by Friedrich Wilhelm August Frobel, which were a foundation of his kindergarten curriculum. As a teacher, Anna was excited by the idea and bought a set for her son. Little Frank played with the geometrically shaped blocks for a lot of time.

The family experienced financial issues and moved to Madison. His father taught music lessons and served as a secretary to the Unitarian society. When he was 14 years old, Wright’s parents separated. The divorce was finalized in 1885, and his father left Wisconsin. Wright took the middle name Lloyd to honor his mother’s family. He was now the only male in the family and had to take care of his mother and two sisters. Wright attended Madison High School and was later admitted to the University of Wisconsin-Madison, but he never got a degree.

In 1887, Frank Llyod Wright went to Chicago to look for a job. Since the city was partially burned down in the Great Chicago Fire of 1871, there were a lot of new developments in the city. He found work as the draftsman for the Joseph Lyman Silsbee firm. During this time he also worked for his uncle and two of his aunts. Wright felt that he is underpaid for his work and quit the job to work as a designer for Beers, Clay and Dutton. Since he was yet too inexperienced to design buildings, he returned to Silsbee with a raise.

In 1888, Wright became the apprentice for Adler & Sullivan. Sullivan had little respect for his employees, but he took Wright under his wing. In 1890, he already had his private office. During his time with Sullivan, Wright worked on Sullivan’s bungalow, James A. Charnley bungalow, Berry-MacHarg House and the Walter Gale House. Despite having an excellent job with the firm, Wright always lacked money.

Frank Llyod Wright had a very expensive taste, and he invested a lot of fund into building his own house. He started to design homes in Queen Anne and Colonial style, although his contract forbade any outside commissions. In 1893, he designed a house for Allison Harlan, only a few blocks away from Sullivan’s Chicago house. The design was unmistakably Frank Lloyd Wright’s which led to his departure from Adler & Sullivan.

After leaving Sullivan’s company, Frank Llyod Wright set up his practice. He moved to the Steinway Hall building, where the loft spaces were shared with Robert C. Spencer, Myron Hund, and Dwight Perkins. The young architects later founded the Prairie School. They were then joined by one of the first female architects in U.S. Marianne Mahoney.

During this time, Wright’s projects were in Sullivanesque ornamentation style, with emphasis on simple geometry, and he also designed houses more conservatively. Examples of his work include the Winslow House, Heller House, and Moore House I in Tudor style.

In 1898, Frank moved his studio to his house, to be closer to the family. In his home studio, Wright would work along with other five men and two women. By 1901, he had completed 50 projects. From 1900 to 1901, Wright finished four houses which have since been identified to be in the Prairie style. His prairie style houses became widespread around Chicago in the following years. The major features of a prairie style house are one or two storeys, open floor plan, low-pitched roofs with extended eaves, ribbons on windows, a prominent chimney and wide use of natural materials.

In 1932, Wright started to call for students wanting to come to Taliesin to study architecture. The fellowship later evolved into Frank Lloyd Wright School of Architecture. By the 1920’s, Wright had developed his Organic style. One of his most prominent works from this time was Graycliff summer estate, which consists of three buildings overlooking Lake Erie. Falling water has become one of the most famous symbols of Wright’s private residences. The house is constructed over a 30-foot waterfall. It has a series of balconies and terraces, and it is built from limestone and cement.

One of Frank Llyod Wright’s most extended and recognized works is the Guggenheim Museum in New York City. He worked on the project from 1943 till 1959. The interior of the building resembles the inside of a seashell. In the museum, visitors were meant to take an elevator to the top and work their way down viewing the artwork.

Wright also designed the Price Tower in Bartlesville, Oklahoma. It is currently a National History Landmark.

The Florida Southern College is constructed of 12 buildings but was initially planned to be 18 buildings. It is the most extensive collection of Wright’s architecture in one place. Wright’s last project was the Kalita Humphreys Theater in Dallas.

Besides being an architect, Wright was also a dealer of Japanese art. He even made more money on dealing art rather than his architecture projects. Wright has designed around 400 buildings, but only around 300 have survived. Hurricane Katrina destroyed his Luis Sullivan Bungalow, and the Arinobu Fukuhara House was damaged by the 1923 Great Kanto earthquake. Several more of his projects were destroyed in natural disasters, fires and also some have been intentionally demolished.

Frank Llyod Wright has been married three times. His first marriage was to Catherine “Kitty” Tobin, which lasted from June 1889 until November 1922. He was known to be a man-about-town and wasn’t very fatherly. He and Kitty had six children. While Wright was designing a house for Edwin Cheney, he fell for his wife, Mamah. She was an early feminist, and Wright saw her as an equal. They became the talk of the town, but Wright’s wife refused to give him the divorce. Mamah moved to Europe for two years to obtain the divorce on the grounds of desertion. During this time, Wright spent almost a year in Italy, where he lived in Florence with his eldest son. He later moved to Fiesole to live with Mamah. She was granted a divorce, while Kitty still wouldn’t.

In 1910 Wright came back to the USA and persuaded his mother to buy him land in Spring Green. He then started to build his own house, called Talisien. In 1914, when Wright was working in Chicago, a male servant of the house set it on fire and murdered seven people with an ax, while the fire was still burning. The killed included Mamah and her two children, a gardener and a draftsman and one other workman’s son. Only two people survived the fire, one of whom helped to limit it to the studio, so the residential wing didn’t burn down.

Wright’s next wife was Maude “Miriam” Noel, an artist who he met married in 1923. She suffered from addiction to morphine, which led them to get a divorce only after a year, but the divorce was finalized in 1927. Wright’s last wife was Olga Lazovich Hinzenburg, a ballet performer. They had a daughter together.