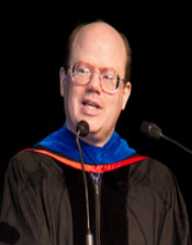 Lawrence Mark Sanger was born on July 16, 1968, in Bellevue, Washington. His father worked as a marine biologist, and his mother was a housewife. The family later moved to Alaska. After graduating from high school in 1986, Sanger went on to study at Reed College, where he majored in philosophy. During his college years, he became interested in internet and the possibilities for publishing it offered.

While still in college, Sanger created a list server for students and tutors to meet for tutoring. He also started the Association for Systematic Philosophy. In 1991, he received his Bachelor of Arts degree and went on to study at the Ohio State University. In 2000, he received his doctorate from Ohio State.

In 2007, Sanger began examining possibilities for online education. He liked the idea that education would be fully digitalized and there would be no bureaucracy enforcing any rules. He wrote an essay, stating that although the internet has various opportunities, there is a lack of reliable information.

In 2008, Sanger participated in a debate at the Oxford University, in a proposition that the internet is future of knowledge. In 2000, Sanger became the editor-in-chief for Nupedia, a Web-based encyclopedia with articles written by volunteers. He soon began to oversee Nupedia and developed a process of review for all articles and recruited editors. The webpage was growing slowly, and Sanger suggested a wiki to be created to increase the article development. This resulted in the creation of Wikipedia.

Larry Sanger wrote the initial pages to set up Wikipedia and promoted the site. The page outgrew Nupedia in just a couple of days after launching. The page took off, and things began to go out of control since it became overrun by people who were opposed to the site. Sanger wanted to put a stronger emphasis on expert editors. However, the constant battles and lack of support from his team made Saner leave the project.

In 2005, the co-founder of Wikipedia, Jimmy Wales began downplaying Sanger’s role in the creating of the page. Since Sanger left the project, he had been critical of its accuracy and other problems with the page.

After leaving Wikipedia, Larry Sanger began working at The Ohio State University as a philosophy lecturer. In 2005, he became the Director of Distributed Content Programs at the Digital Universe Foundation. He was also the key organizer of the Digital Universe Encyclopedia which was launched in 2006. Sanger’s main aim is the accuracy of the content, which spurred a new plan to an encyclopedia called Citizendium. He launched the site in 2007.

The main goal of Citizendium was to address the problems Wikipedia has and establish the page and a scholarly and credible online encyclopedia. The page did not have fast growth, mainly due to the editing model. One of the biggest problems of the page was that the experts could not reach a consensus on several topics, and many left the work on the page.

In 2009, Sanger stopped editing the Citizendium content and stepped down as editor-in-chief. Since then, he has worked on the WatchKnowLearn project, which focuses on the education of young children via videos and other web media. In 2010 he began working on web-based reading tutorial applications and launched Reading Bear in 2012.

Larry  Sanger married in 2001 and moved to Columbus, Ohio. He and his wife have two children.