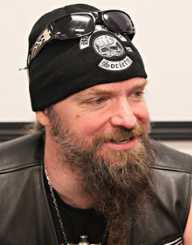 Jeffrey Philip Wielandt was born on January 14, 1967, in Jersey City, New Jersey, USA before he changed to Zakk Wylde. He is well known for his association with Ozzy Osbourne, and his name has dominated over heavy metal as its founder and that of Black Label Society. His musical journey began when he was young. He is a songwriter, a multi-instrumentalist, and a producer and after forming ‘Black Label Society,’ the band inspired a lot of rock bands and fans that have created ‘Berzekers’ as their identity.

Jeffrey Phillip Wielandt was born on 14 January 1967 in Bayonne, New Jersey. At the age of eight, Zakk Wylde started playing his guitar and became serious with it in high school. He used to play guitar up to 12 hours and would sometimes sleep in school.

While in Toms River, New Jersey, Zakk Wylde worked in Silverton Music at the age of 14 years. His first band was Stone Henge and later joined ‘Zyris’ which was New Jersey’s local band. In 1987, Ozzy Osbourne later selected him to be the lead guitarist and was given the role as the songwriter. Wylde also had the same roles in a band called ‘Pride & Glory,’ which later came to be disbanded.

The first album, which Zakk Wylde made in collaboration with Ozzy Osbourne, was ‘No rest for the Wicked’ that was created in 1988 and was number 13 in the Billboard 200. The album ended up with certified gold and double platinum by the RIAA. His first album, ‘Book of Shadows’ was released in 1996.

Zakk Wylde increased his fame when he got custom-made guitars from Gibson Les Paul significant because by the "bulls-eye" graphic. He created a company, Wylde Audio, which produces custom guitars and amplifiers. For three years, he was voted in the ‘Guitar World’ magazine polls as being the Most Valuable Player. In the Hollywood Rock Walk of Fame, Wylde’s name has been inducted and so as his signature and handprints.

Zakk Wylde has been having health problems, and this was seen in 2009 when he was hospitalized because of blood clots.

Over the years, Zakk Wylde has referred to himself as Christ’s soldier since he is Irish Catholic and wants to promote the message of God.

Zakk Wylde married Barbaranne to whom they were blessed with four children: Hayley Rae, Hendrix, Sabbath, and Jesse. Ozzy Osbourne is the godfather of Jesse. His long life friend, Darell ‘Dimebag’ Abbott, was murdered in 2004 prompting Wylde to dedicate to him a song, ‘In this River.’  Wylde is a big New York Yankees fan. In the year 2011, he collaborated to produce "Berserker" Hot Sauce, with Blair's Sauces and Snacks.