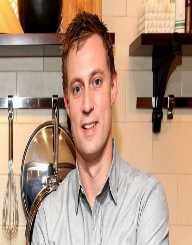 Bryan Voltaggio was born 19th April 1976, in Frederick, Maryland, in the United States.

At the age of 20, after having worked in two different hotel restaurants, Voltaggio enrolled in the Culinary Institute of America, based in New York, which he graduated from with his Associate Degree in Culinary Arts.

After graduation, Bryan Voltaggio met chef Charlie Palmer, who became his mentor. After working with Palmer for a period of time, Bryan Voltaggio went to France and worked in the Michelin three-star restaurant, Pic.

Upon returning from France, Bryan Voltaggio once more joined Palmer at Steak, in Washington, D.C.

In 2008, Bryan Voltaggio returned to Maryland and opened VOLT. Over the next few years, he opened several other restaurants, being, Lunchbox, Family Meal, RANGE, and AGGIO.

He prefers to be on-deck in the restaurant, though and declined a further invitation to compete on Top Chef Masters.

Bryan Voltaggio has twice been nominated for the James Beard Foundation Award of Best Chef, in 2010 and 2012. In 2012, he was a semi-finalist.

Bryan Voltaggio has released several cookbooks, both on his own, and with his brother.

Bryan Voltaggio is a strong supporter of Share Our Strength, which fights against childhood hunger. To date, he has raised over $750,000 for the cause through his annual events.

Bryan Voltaggio is married to Jennifer, and they have three children. The family lives in Maryland.