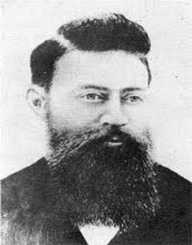 Edward Hammond Hargraves was born on October 7, 1816. He was an Australian Gold Prospector. He died on October 29, 1891.

Edward Hammond Hargraves was born on October 7, 1816, in Gosport, England. He was born to Lieutenant John Edward Hargraves and Elizabeth Hargraves. He was brought up alongside two siblings. He schooled at Brighton Grammar School, England. In 1982, he went to Sydney. He on the latter worked at a property which was at a close distance to Bathurst. In 1833, he engaged in collecting tortoise shells and béche-de-mer back in Torres Strait. He later on the same year moved back to England.

In 1834, Edward Hammond Hargraves went to Bathurst. He worked as a property overseer. In 1836, he went to Gosford. In 1839, he worked as an agent in the General Steam Navigation Company. He later constructed the ‘Hill Hotel’ on land that he bought from the dowry he received. He then purchased a property at Manning River. In 1849, he travelled to America due to the Californian gold rush information that reached him. He later turned unsuccessful with his Gold mining mission since he didn’t find any gold. He afterwards went to the Western districts of New South Wales, Australia in the hope of finding gold.

In 1851, Edward Hammond Hargraves went to Sydney on a mission to earn a fortune in goldfield and gold mining. In the same year, he moved to Bathurst. He alongside John Lister discovered five specks of gold Lewis Ponds. Later the same year, he returned to Sydney. He after that wrote to ‘Sydney Morning Herald’ on clarification of the facts about the goldfield where Lister and William found four ounces of gold. He then made communications about areas where there is an existence of gold. He received ten thousand euros reward back at Bathurst from the New South Wales Government.

Edward Hammond Hargraves later was appointed the Commissioner of Crown Lands. He also received five thousand euros reward from the Victorian Government. In 1853, he retained his title for the first ‘Ophir’ denoting Goldfield discoverer. In 1853, he moved to England where he met Queen of England. In 1855, he wrote and published ‘Australia and its Goldfields’ a book discussing on gold discovery. In 1877, he was granted a two hundred and fifty euros annual pension by the New South Wales Government.

In 1836, Edward Hammond Hargraves married Eliza Mackie back in Sydney with whom they had five children. He died on October 29,1891, in Sydney. He was laid to rest at Waverley Cemetery. He died at the age of Seventy-five.