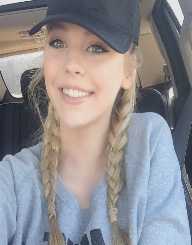 Loren Gray Beech started her popular rise in the social media world in 2013 and has gone from strength to strength since then. Not only does she have a keen interest in music, but she is very much into modeling and fashion as well.

Over her journey, Loren Gray Beech has also collaborated with other social media stars, and they have a shared channel called, Our Journey. Some of the other contributors are Baby Ariel, Zack Clayton, and Mario Selman.

In 2017, Loren Gray Beech's network is estimated to be several hundred thousand dollars.