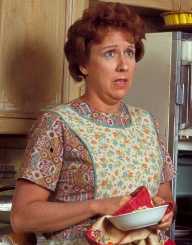 Jean Stapleton is born Jeanne Murray was an American was an American character actress who acted on stage and television. The award-winning actress is best known for her role as Edith Bunker in the 1970’s sitcom All in the Family. Her classic performance won her two Golden Globes and three Prime Time Emmy for Actress in a Comedy series. She briefly reprised her role in “All in the Family” in the series, Archie Bunker’s Place. She left the show after the first season. She also played roles in works like Damn Yankees; Bells are Ringing, Straight Theatre, Woman with a Past and My Three Sons among others. She was inducted into the American Theatre Hall of Fame and Television Hall of Fame in 2002.

Jean Stapleton was born to Marie A. and Joseph E. Murray on January 19, 1923, in Manhattan, New York. Michael was a billboard advertising salesman and Marie an opera dancer. Her brother Jack Stapleton was a stage actor and cousin, Betty Jane Watson, was an actress. She received education from the Wadleigh High School, graduating in 1939. She then enrolled at Hunter College.

Jean Stapleton started a career as a secretary before going into acting. She made an acting debut at age 18 in 1941 in the summer stock theatre. Her New York debut was in the Off-Broadway play American Gothic. In 1949, she was part of the national tour of the play Harvey. In 1955, she featured in the Broadway theatre hit Damn Yankees.

Jean Stapleton went on to play roles as Sue in Bells Are Ringing, 1956, Funny Girl in 1964 and the play Rhinoceros in 1961. In reprised her role in the film version of Damn Yankees and Bells Are Ringing. Stapleton appeared in many television works including Robert Montgomery Present, Straight Theatre, Women with a Past, The Patty Duke Show Car 54, Where Are You? And Naked City among many others. She appeared in the musical Something’s Afoot in 1979. She followed it by playing the title role in the television movie, Aunt Mary, based on a true story of Mary Dobkin.

All In the Family

Although Jean Stapleton played notable roles in many plays and television works, it was All in the Family that brought her fame. She auditioned and won the role in 1971, after accepting a request by producer Norman Lear to partake in the audition. In All in the Family, she played the role of Edith Bunker, a devoted and long-suffering wife of Archie Bunker. It sort to address social and political challenges of the time including dealing with breast cancer, menopause, and death. She will play the role until 1979. Stapleton’s role earned her 8 Emmy nominations winning three. She also received two Golden Globe awards.

Jean Stapleton played many other film and television roles in post All in the Family. In 1984, she co-starred in the feature film, The Buddy System, alongside Richard Dreyfuss and Susan Sarandon. Stapleton played the role of Pansy Milbank opposite John Travolta in the film Michael, 1996. The versatile actress appeared in the You’ve Got Mail in 1998, and in 2000 made a guest appearance in the television series, Touched by an Angel.

Jean Stapleton was married to William Putch. The couple had two children, John Putch, who is an actor, writer, and director and Pamela Putch, a television producer. William Putch died of heart attack in 1983, during a tour with Stapleton with a play he had directed. Stapleton was a member of the Christian Science Church. Jean Stapleton died on May 31, 2013, in New York City. She died of a natural cause with family and friends around her.