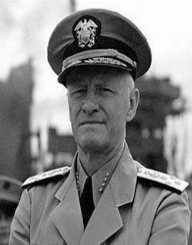 Chester William Nimitz, Sr., was born 24th February 1885, to Chester and Anna Nimitz. He was born in Fredericksburg, Texas, in the United States. His father was very sickly and died several months before Nimitz was born.

Nimitz wanted to apply for West Point to become an Army officer, but no appointments were available at the time. James L. Slayden, the local congressman, told Nimitz there was one position open at the United States Naval Academy.

He studied and was awarded the appointment from Texas’s 12th congressional district in 1901. He graduated in 1905 with distinction.

Charles W. Nimitz first joined the battleship Ohio in San Francisco and was then transferred to the Baltimore in September 1906. Nimitz was stationed in the Far East and Asiatic during this period. After serving his two years as a warrant officer, he was commissioned as an ensign.

He was in command of the destroyer, Decatur, which unfortunately ran aground on a mud bank in the Philippines in 1908. Nimitz was court-martialed and received a letter of reprimand after having been found guilty of neglect of duty.

He returned to the U.S. soon after, and he began schooling in the First Submarine Flotilla. He was given command of the flotilla several months later, and over the next few years, a succession of command on several submarines followed.

In 1913, the German-speaking Nimitz studied engines and engine plants in Nuremberg, Germany, and Belgium.

Charles W. Nimitz returned to the New York Navy Yard and was appointed executive and engineer officer of Maumee when she was commissioned in 1916. The U.S. declared war on Germany in April 1917. Nimitz was Chief Engineer of Maumee, and under his supervision, underway refueling took place for the first time.

In February 1918, he received a Letter of Commendation for Meritorious Service and was appointed Chief of Staff.

After the war, Nimitz commanded different battleships and cruisers, and in 1922, he went back to study at the Naval War College in Newport, Rhode Island.

After the attack on Pearl Harbor (7th December 1941), President Roosevelt appointed Charles W. Nimitz Commander-in-Chief, United States Pacific Fleet. On 31st December he was promoted to the rank of Admiral.

In March 1942, it was decided by the US-British Combined Chiefs of Staff that the Pacific theater would come under the responsibility of the U.S. The U.S. Joint Chiefs of Staff put Nimitz in command of all air, land and sea units controlled by the Allies in that area.

In December 1944, a new rank of Fleet Admiral was established, the highest rank in the Navy. Charles W. Nimitz was appointed to the rank that same month.

In 1945 when the Japanese formally surrendered and signed the treaty, he was the representative who signed on behalf of the U.S. After the war, Nimitz was appointed by the U.S. Senate as the Chief of Naval Operations. He had agreed to a two-year term.

In 1949, Charles W. Nimitz was appointed by the UN as Plebiscite Administrator for Jammu and Kashmir. Pakistan accepted his role, but India didn’t. He was in the role until 1953.

Nimitz retired from his Chief of Naval Operations position in 1947, but the rank of Fleet Admiral is an appointment for life. This meant he remained on active duty for the remainder of his life, with full pay and benefits.

He also served as a special assistant to the Secretary of the Navy in the Western Sea Frontier and worked to restore goodwill with Japan after World War II.

From 1948 to 1956, Charles W. Nimitz served as a Regent of the University of California.

He also received Orders of various degrees from over 15 countries.