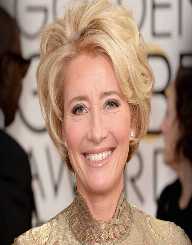 Emma Thompson is a British Academy Award-winning actress and screenwriter who is best known for her work in In the Name of the Father and Sense and Sensibility.

Thompson was born on 15 April 1959 in Paddington, London, England. Creative people from an early age surrounded Thompson. Her mother, Phyllida Law, was an actress who appeared most notably in a film adaption of Much Ado About Nothing. Her father, Eric Thompson, was a writer and director, he was well known in Britain for writing and narrating the children’s TV series The Magic Roundabout. Thompson also has a younger sister, Sophie, who is an actress, most notably appearing in the British comedy Four Weddings and a Funeral.

Thompson grew up in London but also spent many summers in Scotland, where her maternal grandparents lived. Thompson attended Camden School for Girls and upon graduation attended Newnham College at the University of Cambridge. At college, she became a member of the theatre group, Footlights. The Footlights was a famous group that had existed since the 19th century but gained increased notoriety when some ex-members fuelled Britain’s 1960s satire boom. The group performed at the ADC Theatre in Cambridge and also attended the annual Edinburgh Festival. Thompson joined fellow future actors Hugh Laurie and Stephen Fry in the Footlights. Thompson became the Vice President of Footlight society in 1980, and 1981 Thompson and the Footlights won the inaugural Perrier Award at the Edinburgh Festival.

Thompson’s first professional television appearance came on a 1982 episode on the British sketch show, Not the Nine O’Clock News. Thompson performed with former Footlights colleagues, Hugh Laurie and Stephen Fry, as well as comedian Ben Elton on the ITV show There’s Nothing to Worry About. The show was meant to be a rival for the bbcs Not the Nine O’Clock News. However, only three shows were made, and they were not aired nationally instead the group, joined by actor Robbie Coltrane, made the sketch show Alfresco for ITV. They also pitched a sketch show, The Crystal Cube, to the BBC, but only a pilot episode was ever made. Alfresco earned its name for being filmed on location rather than in a studio. The show ran for thirteen episodes and ended in 1984.

Thompson made a major acting breakthrough in 1985 when she appeared in a West End production of Me and My Girl. The role allowed Thompson to move away from being typecast as a comedy actress. The show ran for fifteen months and tested Thompson’s endurance to the breaking point. The same year she wrote her first show, Emma Thompson: Up For Grabs. She then landed the leading role in the mini-series, Fortunes of War and TuttiFrutti. Both shows were very well received. In 1989, Thompson made her first film appearance in The Tall Guy, a romantic comedy. Thompson played Jeff Goldblum’s love interest in the film.

Thompson also performed in some Shakespearean productions in 1989 and 1990. British cinema enjoyed huge popularity in America during the 1990sand Thompson would become one of the leading ladies of the British film industry. In 1990, she appeared alongside fellow British actors, Judy Dench and Hugh Grant in Impromptu. However, her major cinematic breakthrough was in Howard’s End. The film was a period drama and saw Thompson appear alongside Anthony Hopkins. The film was the success and received nine Academy Award nominations. She starred alongside Stephen Fry and Hugh Laurie in 1992’s Peter’s Friends. In 1993, she appeared in Much Ado About Nothing alongside Denzel Washington and Keanu Reeves.

Thompson provided another acting masterclass in the 1993 film, Remains of the Day. Once again Thompson starred alongside Hopkins in the interwar drama about a butler and a housekeeper. The film received eight Academy Award nominations. That same year Thompson played a supporting role in the Jim Sheridan directed the film, In the Name of the Father. Thompson plays a lawyer representing the Guilford Four and the Maguire Seven, groups of Irish men and women framed by the British police and state for acts of terrorism. The film saw Thompson act alongside Daniel Day-Lewis. The film was nominated for seven Academy Awards and was a huge box office success. Thompson’s first Hollywood produced film was 1994 comedy Junior, which sees Arnold Schwarzenegger become pregnant and Thompson is his doctor.

Thompson wrote the screenplay for and starred in Sense and Sensibility in 1995. The film grossed over a hundred and thirty-four million dollars and also starred Kate Winslett and was directed by Ang Lee. The film was also a critical success as it earned seven Academy Award nominations. In 1997, Thompson acted alongside her mother in The Winter Guest, which was Alan Rickman’s first outing as a director. She also played herself on the American hit comedy, Ellen. Thompson was offered numerous Hollywood roles but turned them down as she did not want to spend long periods of time in L.A. She did star alongside John Travolta in Primary Colours and Alan Rickman in Judas Kiss.

In 2001, Thompson starred in the made for HBO film, Wit. Thompson gives a hugely emotional performance as a cancer sufferer. 2003 saw Thompson feature in the star-studded Love. The film also featured Hugh Grant, Alan Rickman and Liam Neeson and became an instant Christmas classic. The following year she appeared in another HBO film, Angels in America. The film starred Meryl Streep and Al Pacino and is set against the backdrop of the AIDS epidemic in America.

Thompson played divination teacher Sybil Trelawney in three of the Harry Potter series of films. 2012 saw Thompson play the head of MIB in Men in Black 3. The film grossed over six hundred million dollars, making it her highest grossing film in which she has a major role. She also played a voice role in the Pixar animated film, Brave. She received enormous praise for her performance alongside Tom Hanks in Saving Mr. Banks. Thompson co-wrote the screenplay for the third installment of the Bridgett Jones series and provided the voice for Mrs. Potts in the 2017 film, Beauty, and the Beast.

Thompson married actor and director Kenneth Branagh in 1989. The couple collaborated on some films and plays. They separated in 1995. Thompson married Greg Wise in 2003. Together they have a daughter, Gaia together. Thompson and Wise also informally adopted former Rwandan child soldier TindyebwaAgaba.

Thompson has won two Academy Awards, one for Best Lead Actress and one for Best Writing; they are for Howards End and Sense and Sensibility respectively. Thompson was also nominated for a further three Academy Awards, Best Supporting Actress for In the Name of the Father and Best Lead Actress for The Remains of the Day, both 1994, and Best Leading Actress for Sense and Sensibility in 1996. Thompson has also been nominated for nine Golden Globe Awards of which she won two.

Thompson has been outspoken on some issues amongst them are women’s rights and the Israeli blockade of Gaza. She has also raised money for environmental causes and refugees and people with AIDS in Africa.