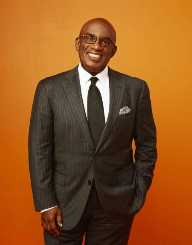 Al Roker is an American weatherman, actor, and author. He is most known for being the anchor of NBC’s The Today Show. He also holds the world record for uninterrupted weather reporting for 34 hours straight.

Albert Roker was born on August 20, 1954. His star sign is Leo, and his birthplace is New York City. His full name is Albert Lincoln Roker Jr.

He has five siblings and is the eldest child of his parents Albert Roker Sr. and Isabel Roker. Roker was smitten with television as a child and wanted to become a director.

Albert Roker went to the Manhattan’s Xavier High School for early education. He then enrolled at the State University of New York, Oswego to get a degree in communications. While studying, he started working as a weekend weatherman on a CBS affiliate. He graduated in 1976.

Albert Roker started his career by working for the WTTG. He got a mentor in Willard Scott who guided him in his initial career. In 1978, Roker shifted to Cleveland where he worked with NBC affiliate WKYC-TV.

After working with WKYC for nearly five years and not having any breakthrough, Albert Roker decided to return to New York and worked for WNBC in 1983.

His anchoring left a lasting impression as he was very entertaining and always kept the attention of the crowd. Soon he started to work as a substitute on The Today Show. In 1985, he became the co-host of NBC’s Annual Christmas at Rockefeller Center.

Willard Scott groomed Roker well under his mentorship and when he stepped down from the anchor of the Today Show Roker was trained and experienced enough to step in.

In 1996, after Scott’s recommendation, Albert Roker became the new face of the Today Show and worked as their weatherman and anchor. He also interviewed several famous personalities on this show.

Two years before this, he launched Al Roker Entertainment, and his company focused on producing shows for Discovery, Lifetime & Spike.

His show Albert Roker on the Road became quite famous. He also hosted the game shows Remember This? And Celebrity Family Feudamong.

Despite trying his hands at several other ventures in which he found considerable success, Albert Roker didn’t leave his job at The Today Show saying that he loves being there.

He still hosts it every day. Albert Roker is also known for the Roker-than in which he did a 34-hour non-stop weather forecast to make a new Guinness Book of World

Albert Roker has written several best-selling books. His first book was Don’t Make Me Stop This Car: Adventures in Fatherhood. It became a New York Times best-seller, and he followed it with several cookbooks.

In 2009, he released The Morning Show Murders. In 2016, he released Been There Done That: Family Wisdom for Modern Times – co-written with his wife.

Albert Roker is a highly famous and accomplished TV personality. He has received several Emmys in his career.

American Meteorological Society granted him a Seal of Approval. New York Magazine has named him Best Weatherman twice. He is a New York State Broadcasters Hall of Fame inductee, included in 2015.

Albert Roker has been married twice. His first wife was WNBC producer Alice Bell. They married in 1984 and divorced ten years later. Roker then married Deborah Roberts – a journalist.

They first met in 1990 on an episode of Today. He has three children – a daughter Courtney from his first marriage, a daughter Leila and a son Nicholas from his second marriage.

Albert Roker had to fight obesity in his life, and after undergoing surgery to lose weight, he ran and completed the New York City Marathon in 2010.