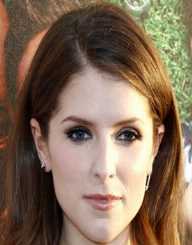 Rising from a child actor to be successful in the mainstream is no mean achievement. It takes talent extreme talent and dedication which Anna Cooke Kendrick has proved to have. Born on August 9, 1985, Anna Kendrick is an American actress and a singer. At age 12 she got her debut visible role in the Broadway musical High Society. The role gained her a nomination for Best Featured Actress in a Musical for the Tony Award, but she rose to fame with her supporting role in the film The Twilight Saga in 2008.

Anna Cooke Kendrick was born to Janice and William Kendrick on August 9, 1985, in Portland, Maine. Kendrick’s father was a teacher and mother an accountant and they are of an English, Irish and Scottish descent. Before her entertainment career, she studied at the  Deering High School in Portland. Her older brother Ronald Michael Cooke Kendrick had already taken the lead in the film industry. He is best known for the film “Looking for an Echo.”

Anna Kendrick had an early acting career at a young age, but her prominent role was in the Broadway musical video High Society in 1998 at age 12. She played a supporting role in that earning her a Theater World Award and also nominations for the Tony Award and Drama Desk Awards for Featured Actress in a Musical. After a display of talent with a characteristic of a promising actress, Kendrick was given a supporting role in the Stephen Sondheim’s musical play A Little Night Music in 2003.

Anna Kendrick later made a film debut in the musical comedy Camp where she played the role of Fritzi Wagner in 2003. Once again she gained a nomination for Best Debut Performance in the Independent Spirit Award. In 2007 she starred in Rocket Science in which she played the role of a high school debater to earn her another nomination in the Independent Spirit Award for Best Supporting Female.

Twilight, Up In The Air Etc

Anna Kendrick had gained recognition with her films, but the one which projected her into stardom was Twilight in 2008. She played the role of Jessica Stanley a friend to Bella Swan in the movie centred on the Stephanie Meyer’s book Twilight. The film was a significant hit at the box office. She would later mature from a supporting role to a leading role in the crime thriller Elsewhere after a role in Marc Pease Experience in 2009. The same year she had a role in Up in the Air playing alongside George Clooney. Her role as an ambitious college graduate won her nominations for the Academy Award, Golden Globe Award, Screen Actors Guild Awards and the BAFTA Awards.

Kendrick had now cemented her position in the movie industry and got several other roles including The Twilight Saga: Eclipse in 2010, Scott Pilgrim vs. the World and in 50/50 where she played inexperienced therapist.  She played several roles in 2012 and arguably her most successful film was in 2012 musical comedy Pitch Perfect which was centred on the non-fiction book Pitch Perfect. Kendrick played Beca Mitchella rebellious college freshman who joins a cappella group called the Barden Bellas and finds that her more modern approach to music clashes with the traditional method of the group’s leader. The film became successful commercially and had good reviews.

In 2016 Anna Kendrick starred in the comedy Mike and Dave Need Wedding Dates which was commercially successful. Her most recent film is Table 19 released on Mach 3, 2017 and would also feature in Pitch Perfect three later in 2017.