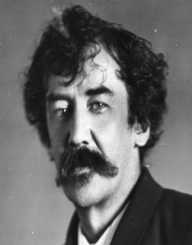 James Abbott McNeill Whistler was born in 1834 in the US, in Massachusetts. His father George was an engineer, and he was the first child of his parents. In 1837 they moved to Connecticut because George Whistler was offered a job there. Two years later George Whistler became the chief engineer in a big railroad company. This promotion increased the family’s wealth, and they relocated back to Massachusetts, where they lived in a fancy district. They lived there until 1842 when they moved to Russia, St. Petersburg.

They moved to Russia because George Whistler was offered a better job there. The offer was made by Nicholas I of Russia. James Abbott McNeill Whistler was at the time moody, prone to laziness, but as soon as his parents discovered that drawing helped him focus, they encouraged it.

James Whistler was enrolled in the Imperial Academy of Fine Arts when he was eleven years old, in 1842. The first time James Whistler recalled thinking about art as a career, was when they were visiting London from 1847-1848. There his brother-in-law introduced him to many galleries, collectors of art and took him to listen to lectures.

James’s father died of cholera when James was 15, so the family decided to move back to Connecticut.

James Abbott McNeill Whistler’s mother wanted James to become a minister, so enrolled him in a Christ Church Hall School. He figured out this wasn’t interesting for him soon and joined the United States Military Academy at West Point in 1851. Even though he was heavily nearsighted, he was admitted, because of his family name. After three years he was dismissed, because of his attitude problems.

James did gain some knowledge of West Point experience. He was taught drawing and map development, which he continued to do after leaving West Point. He was drawing maps for the military along the US coast. As he disliked the work, he was transferred to an etching division, where he spent another two months. After those two months, he decided to become a professional artist and lived at a friend’s house. The friend Tom Winans also sponsored Whistler’s ticket to Paris to study art. This was when Whistler was in the US for the last time; he never returned.

In 1855, James Abbott McNeill Whistler arrived in Paris. He studied briefly at EcoleImpériale and Marc-Charles-Gabriel Gleyre. There he gained two most essential principles for his artwork in the future. The first: line is more important than color. The second: black is the primary color.

Even though attending these schools, he preferred to learn on his own. Whistler lived in Paris until 1858, then moved to London.

In London, James Abbott McNeill Whistler painted two paintings that were exhibited: in 1858 “La Mere Gerard” and 1959 “At the Piano.” He decided that London would be his home. It was in London, where he developed his specific technique of painting with only pre-selected, very limited palette.

In 1861, Whistler returned to Paris for a short time, where he painted “Symphony in White, No.1: The White Girl”. This turned out to be a portrait of his lover Joanna Hiffernan at the time. Hiffernan appeared in paintings also in later years, in 1863 and 1864. Their relationship ended after Hiffernan posed nude for another artist.

In 1866, James Abbott McNeill Whistler visited Chile and was inspired to draw “nocturnes” – paintings of the night. He used blue or light green palette. He continued creating nocturnes also after returning to London.

Whistler is probably known the best for his portraits. One of the most famous is “Whistler’s Mother.” This he painted in 1871. The story behind the painting was straightforward – one day a model did not show up. Hence Whistler asked his mother, Anna, to model for a portrait, which she agreed to. Currently, the painting is exhibited in Paris, in Musée d’Orsay. In the year 2015, this painting was admitted to be the most important American artwork, which is not in the US. Whistler also created several etchings, dry-points, and lithographs.

James Abbott McNeill Whistler sued John Ruskin, a critic, in 1877, because of Ruskin condemning the “Nocturne in Black and Gold: The Falling Rocket.” The trial happened in 1878. The verdict was in favor of Whistler, and the court costs had to be split.

The trial was partly to be blamed for Whistler’s bankruptcy in 1879. Whistler received a commission for the prosecution. This fee he used to go to Venice; initially, he planned to go there for three months but stayed for fourteen. He was extremely productive in that period and created various paintings and etchings.

James Abbott McNeill Whistler’s mother Anna died in 1881. He adopted her middle name McNeill in her honor. In 1886 he became the president of the Society of British Artists and remained the president for two years. In 1888 he married Beatrice Godwin, whom he had painted (“Harmony in Red: Lamplight”). After the wedding, they went to Paris together.

James was doing very well, was recognized as a successful artist and created many more masterpieces. This was ongoing until they discovered that Beatrice had cancer. Due to that, they returned to London in 1896 for treatment. She nevertheless passed away a couple of months later.

In the last years of his life, James Abbott McNeill Whistler drew sea and self-portraits. He died in 1903.