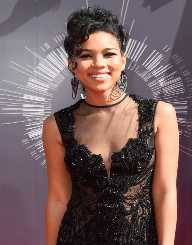 The life of a blossoming flower cut short by a fatal plane crash left a dent in the entertainment industry instantly. Everything seemed to come to a stand-still as the sad but reality of her demise swept the streets worldwide. Aaliyah was an all-round artist from singer to dancer to model and actress.

American by origin, she was born in Brooklyn, New York and brought up in Detroit, Michigan. By the age of 10, she was televised on the star search show where she shared the stage with Gladys Knight.

Aaliyah was officially signed with Jive Records and her family recording label, Blackground Records which belonged to her uncle. The uncle introduced her to R-Kelly. R. Kelly saw her in her debut album. She left Jive Records later on after an allegation of an illegal marriage with R. Kelly and signed with Atlantic Records.

Aaliyah was born to Diane and Miguel Haughton on January 16, 1979, in Brooklyn, New York. She was African American and her grandmother was a Native American. Aaliyah was enrolled in voice lessons at a very tender age by her mother. She sang at weddings, charity events, and church choir.

She attended Gesu Elementary, a Catholic school, where she acted out a part in the stage play “Annie” in her first grade. From there on she was determined to pursue her road to entertainment. It was not until her father was working for his brother-in-law, Hankerson, in Detroit that her interest grew even further as he seemed interested in her undeniable talent. This earned her the first signing at Jive entertainment.

Aaliyah’s second Album, 1 in a million, was done by Timbaland and Missy Elliot. It topped the charts and sold 3 million copies in the United States and more than eight million copies worldwide.  In 2000, Aaliyah broke onto the big screens when she featured in the film, Romeo Must Die, alongside big names such as Jet Lee and DMX. Her song “Try again” was used as the soundtrack to the movie.

Aaliyah went to Detroit schools but had a nasty experience there as she was always teased because of her stature. Despite all these, her mother remained her sole motivator and comforter who made her focus more on the positives. In Detroit High School, Aaliyah maintained a perfect grade 4.0 point average when graduating for the Fine and Performing Arts. She saw Education as critical and maintained high standards despite the pressures at her early stages in her career. She went ahead to choose the career that she loved “ART.”

Aaliyah was first signed by Jive Records where she recorded her first Album, and then she moved on to Blackground Records at the age 12. She then went to feature in the movies “Romeo Must Die, “in 1999 and the “Queen of the Damned,” in 2001.

At her time of death, Damon Dash, the co-founder of Roc-A- Fella Records was her lover though they were not formally engaged. The two met through a friend and fell for each other. Aaliyah never publicly admitted to this as she always maintained they were just good friends.

August 25, 2001, was the year Aaliyah and eight others perished in a plane crash in the Bahamas right on her return trip from filming the video for her song. The pilot of the ill-fated plane was found to be unlicensed, and toxicology tests revealed alcohol and cocaine traces in her system. Her death occurred after the filming of her video to the music “Rock that Boat. “The entire crew perished as the plane crashed and exploded shortly after take-off.