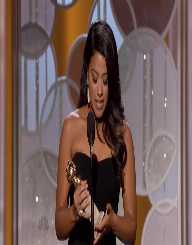 Gina Alexis Rodriguez was born 30th July 1984, to Genaro and Magali Rodriguez. She was born in Chicago, Illinois, United States, and has two older sisters.

Gina Rodriguez started dancing at an early age, a Gina Rodriguez and when she was seven years old, performed for Fantasia Juvenil, a salsa dance company.

She grew up in a Catholic family and did her high schooling at St. Ignatius College Prep. Through her growing-up years, Gina Rodriguez continued to learn salsa.

When she was 16, Gina Rodriguez was one of only 13 teenagers accepted into Theatrical Collaboration at Columbia University. She also studied at the Tisch School of the Arts at New York University, and then Rodriguez studied for a further four years at the Atlantic Theater Company. She graduated with her Bachelor of Fine Arts in 2005.

Gina Rodriguez had her breakthrough in October 2011, when she was awarded an ongoing role in the soap opera, The Bold and the Beautiful. She then won a part in Go for It!, which was a musical film. Her success continued into 2012 when she was in the movie, Filly Brown. She began receiving accolades, which saw her nominated for several awards and winning them as well.

Gina Rodriguez has been busy with her acting. Her first movie was Dayplayer in 2008, and she has been in 18 other movies since then, including two in 2017.

She has also done a lot of television, appearing in episodes of shows such as Law & Order, The Mentalist, and The Bold and the Beautiful. To date, there have been approximately 18 television shows, several where she appeared in multiple episodes.

Gina Rodriguez has been nominated for almost 30 awards. She has won approximately ten awards, including three Imagen Awards, a Young Hollywood Awards, and a Golden Globe Award.

As she has become more well-known, Gina Rodriguez has involved herself with different charities.

She was appointed to the Board of Directors for the Hispanic Scholarship Fund (HSF) in 2015. Gina Rodriguez herself is a former recipient of one of the HSF scholarships and is now in a position to help other Hispanic Americans with their education.

Gina Rodriguez also became involved in an anti-bully campaign in 2015, designing a t-shirt to raise money for the campaign.

2015 was a busy year for Gina Rodriguez from a philanthropic point of view. Her third cause that year was to become involved with Naja. Naja is a lingerie line, but unique for several reasons. The lingerie itself is made from synthetic materials, including recycled plastic bottles so that it is more environmentally friendly. It is also manufactured for women of all shapes and sizes.

The Naja manufacturing business model saves on lead times by up to 80 percent, and the money saved is used towards supporting the children of employees with items such as school books and lunches. The company also understands the importance of a flexible work environment. This all sits very well with Rodriguez, who wanted to be identified with a company that supported women in their empowerment and improving their body image.